Chiggers might bite you anywhere on your body, but they are most likely to bite around your waist and lower body. You likely won’t feel it at first, but you will start to feel extremely itchy after a couple of hours.

How to treat and control chigger bites? Some chigger bite treatments are using hydrogen peroxide to destroy the enzymes that lead to irritation or bite creams for itch relief. Chigger control and prevention methods include spraying your yard with pest control treatment or using repellents when you are outdoors.

Do you think you might have chigger bites? Keep reading to find out how to identify chigger bites and how you can treat them. This article also includes everything you need to know about control and prevention regarding these pests.

If you get bitten by chiggers, you will likely develop bumps, red rashes, blisters, or hives, and likely have several bites in a rash-like pattern on your lower body. These can take a week or two to heal completely. Chiggers can’t spread disease, but scratching can lead to an infection, so you should still treat the bites.

How Do You Get Chigger Bites?

Chiggers live outdoors in planted areas. After they hatch, the babies hang out on plants and keep an eye out for animals and people. When they notice you, they crawl onto your clothes and search for your skin.

Once they find it, the chigger pierces your skin and injects its saliva into you — this act causes all of the itchings. The spit is powerful enough to dissolve skin cells, and the chigger eats the skin as it dissolves.

Your skin is a source of protein and nutrients for the bug. Once it has had its fill, it lets go. Since several days have passed at this point, the chigger is now an adult. They leave behind itchy red bumps that persist for a while, possibly keeping you awake through the night.

Why Do Chigger Bites Itch?

The itching that comes from chigger bites results from the dissolved skin cells. Your skin releases histamines when the cells receive damage. Plus, your skin is inflamed and going to be irritated as it heals.

Make sure you wash the bites with soap and water as soon as you notice them to prevent infection.

Chiggers are tiny red bugs that are not very visible to the naked eye. You will need to use a tool such as a magnifying glass to see them. They are harmless as adults, but the larvae are the ones you need to worry about.

The larvae are yellowish and have six legs. They are very tiny, and they appear to be mere dots to the naked eye. However, you can spot them if they form a cluster on your skin.

The adults have an extra pair of legs, giving them a total of eight. They are still small, so you likely won’t be able to see them well. The adult chigger is much redder than the larvae and is no longer dangerous to you. At this stage, they don’t need to bite anymore.

The chigger life cycle involves metamorphosis through four separate stages. First, the bug hatches from the egg. Then, it searches for food as a larva. If it happens to bite you, it will slowly become a nymph and then an adult.

The chigger larvae need to feed on you for three to four days before it drops off to molt. They spend about a week living in the ground, where they grow another set of legs. After a few more weeks, the nymph transforms into an adult.

The adult then leaves to lay eggs so that the cycle can repeat. These bugs are the most active when the ground is warm, making them more likely to appear in warmer states, but they can survive anywhere.

If the adult happens to come loose in your home, don’t worry! These bugs can’t survive inside, so they should naturally disappear after a few days.

How To Stop Chigger Bites From Itching

To stop itching from chigger bites, first wash the bite with soap and water. Then, apply an antiseptic or hydrogen peroxide; this will kill the enzymes that lead to itchiness and irritation. A chigger bite cream can also help with the itching. Additionally, a cold compress can help with swelling and skin irritation, and you need to avoid taking hot showers.

How Long Do Chigger Bites Last?

Chigger bites start itching within hours of the bug latching onto you. The itch will go away after a few days, but the red rash can take more than two weeks to heal completely. During that time, it will be itchy. We recommend the Evora Labs Chigger Relief Ointment.

Dogs can be bit by chiggers, despite their thick layers of fur. If they scratch at the bite, they might make their skin raw, which could get infected and lead to plenty of other problems.

How To Prevent Chigger Bites

There are plenty of ways to prevent chigger bites. The best ideas are to complete a chigger yard treatment and bring a chigger repellent with you when you go outside. The repellent is especially needed if you are going in the woods or know you will walk in high grass.

What Insecticide Kills Chiggers in Your Yard?

If you want to control these pests outside, you should use products that contain carbaryl, bifenthrin, or permethrin. These materials are known to kill chiggers. You can apply the chigger spray using any garden sprayer. Make sure to hit all the areas you and your family use the most. 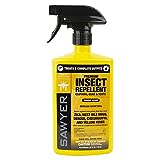 Itching is going to be the most significant symptom that arises with chigger bites. You will feel the most pain and itchiness about one to two days after the initial bite. When there’s an allergic reaction, your skin will feel more painful and warm around the bite.

The bumps left by the bug can look like large welts, blisters, or hives. More than one chigger usually bites at a time, so you may feel like you’re having an allergic reaction to something.

The first symptom you feel will be itching. From there, a bump may appear with a larger red dot in the center.

A rash can come from a chigger bite as well. When the chigger falls off of you, you get red, inflamed bumps. However, more than one chigger often bites at once. They usually fall off at the same time, too, leaving you with a rash.

Chigger bites won’t spread to the rest of your body. The insect stays in one place until it falls off. However, you can be bit by more than one at a time, which might make it look like the bites are spreading.

Can Chigger Bites Last for Months?

An undisturbed chigger can only stay on your body for three to four days. It will take a few weeks for the bites to heal after that, but they will not last months.

Several different home remedies might work for you. This video explains some of them in detail so that you can test it out for yourself:

Several different oils can provide relief for chigger bites, including:

Bite Comparison Between Chiggers and Other Pests

Both bed bugs and chigger bites appear as red, inflamed bumps. Chigger bites occur in large clumps, while bed bugs bite in lines of three. Both tend to chew your lower body, so you will need to inspect them closely.

Chigger bites are going to be smaller than flea bites. They resemble a small raised bump. Flea bites also tend to be around your ankles and lower legs. A chigger will bite in areas where your clothing is tight against your body.

Related: Does the Dryer Kill Fleas?

If you only have one bit, it’s more likely to be a single tick than a stray chigger. Chiggers tend to bite in groups. Tick bites also look like mosquito bites and get much larger over time. If the bite area keeps spreading, then you’re dealing with a tick.

Mosquito bites can occur on all exposed areas of your body, whereas chigger bites tend to be clustered in places underneath clothing where the skin is the thinnest. Mosquito bites usually cause a raised bump to appear on the skin but doesn’t typically turn red as a chigger bite does.

Clover mites are a bit larger than chiggers and are visible to the naked eye. Clover mites will hang out on doors, windows, and curtains, so be sure to check those areas for little red bugs. The mite has long front legs, which is the most significant difference between these insects.

Overall, you want to make sure that you treat your chigger bite properly to avoid an infection. These pests don’t spread disease and can’t survive in your home, so they aren’t a danger to you or your family.