If you’ve recently discovered that you have a bed bug problem, you may be panicking and rushing to find the quickest way to get rid of them. There are plenty of products that claim to be the “most effective solution” for bed bugs, including bed bug bombs, but are they actually effective?

Do bed bug bombs work? Bed bug bombs don’t work well and are one of the least effective products used for bed bugs. People use them because they’re relatively inexpensive, but they don’t do a good job of eliminating bed bugs. This is because the fog can’t reach areas where the bed bugs hide, leaving them alive after it settles.

This article will cover the following topics:

Finally, because bed bug bombs aren’t incredibly effective, we’ll also give you some ideas for alternatives to using them.

What Are Bed Bug Bombs?

Insect bombs have been on the market for several years, and there are bug bombs for everything from mosquitoes and fleas to cockroaches and bed bugs. Simply put, they’re cans of pesticides, similar to any other aerosol spray pesticide. However, bed bug bombs—and other insect bombs—have a single-use trigger.

Once you activate the can, every bit of pesticide that’s in it sprays out all at once. It coats everything in the area with a dusting of pesticides.

How Do Bed Bug Bombs Work?

Operating bed bug bombs is simple. All you have to do is set the bomb down in a central location near the affected area, then activate the trigger. Some have pull tabs; others have buttons. Then, you sit the bed bug fogger down on a flat surface and let it do its thing.

How To Use Bed Bug Bombs?

Foggers can be used in any room of the house, wherever you’re experiencing problems with bed bugs. Different brands have different instructions, but they’re all relatively simple to use. Start by putting down the newspaper underneath the area where you’ll set the can.

Then, you’ll shake the can, activate the trigger, set the bomb on a flat surface, and leave the room. The ease of using these foggers is one reason so many people continue to use them even though they’ve been proven less effective than other methods of bed bug removal.

What To Cover When Bug Bombing?

Other than the infested areas, you’ll want to cover as much as possible when fogging your house. Because these foggers are powerful aerosol sprays, they go all over the place, not just the one specific area you need bombing. For that reason, you’ll want to cover any surfaces you can where bed bugs aren’t an issue.

Furthermore, there are certain things you should prioritize covering. In other words, if you don’t have enough to cover everything, you definitely want to cover these things:

If at all possible, it’s best to remove these items from the house before the bombing. However, some things may be hard to move. Small items, like toys, food, and medicine, should be removed if at all possible, though.

Furthermore, if you have pets, get them out of the house before bombing. With fish, that can be difficult, but the fogger will kill them if the pesticides seep into their tank, so if you can’t remove them, cover them completely with a thick tarp.

How Long To Stay Out of House After Bug Bombing?

Different bug bomb brands will have different instructions concerning how long you need to stay gone after bombing your house. A general rule of thumb is to not return home for at least four hours after bombing. However, some brands encourage you to stay gone even longer than that.

How To Clean Furniture After Bug Bomb?

The pesticides from the insect fogger are toxic. That’s why you must clean everything after you’ve bombed your house, even the items that were covered when the bomb was activated. If you covered everything with heavy tarps, it’s unlikely that anything seeped through, but you can’t be sure, so clean everything!

You should vacuum the floors every day for the first week or so after bombing and wash all linens, curtains, clothes, etc. Next, wash down all furniture with upholstery cleaner, furniture cleaner, or soap and water. Don’t forget to open all the windows and turn on plenty of fans to help the rooms air out faster.

Bug bombs will kill some of your bed bugs, and if you catch the problem early, the bombs may get most of them. However, bed bugs are smart; they know how to hide.

The moment they start to smell pesticides in the air, they’ll burrow deeper into your bed or clothes. They may even leave the room to find somewhere with cleaner air. Since the bug bombs can’t penetrate or move to follow the bugs when they leave, they’re not as effective as other means of killing bed bugs.

You need to follow several precautions when using bed bug bombs, including those we’ve already discussed. Even so, bed bug bombs aren’t entirely safe. The pesticides inside the cans are toxic to both humans and animals, and too much exposure to them can trigger asthma attacks, nausea, severe breathing problems, and other issues.

Reasons Why Not To Use Bed Bug Bombs

Despite being inexpensive and easy to use, there are plenty of reasons not to use bed bug bombs. The biggest reason is that they’re just not that effective. There are plenty of other products with much higher success rates. Here are a few more reasons you might want to avoid them:

Bed Bugs Hide, and a Bed Bug Fogger May Not Reach Them

As already mentioned, bed bugs are smart and know how to relocate. The pesticides in bed bug bombs don’t penetrate through the surface of things, so all bed bugs have to do is leave one room for a safer one. There’s no guarantee that foggers will get to the areas that need attention.

Bug Bomb Foggers Aren’t As Strong as Other Products

You may be wondering, “Are bed bug bombs effective?” or “How well do bed bug bombs work?” The answers to those questions are, “Only sometimes” and “Not as well as most other products.”

The EPA has approved over 300 products for use against bed bugs, and most of them are stronger and work better than foggers.

People choose foggers because they’re cheap and easy to find at any store, but they’re not saving much money or time when using ineffective products. It’s much better to pay more upfront and ensure the bed bug problem is dealt with the first time.

We’ve already discussed this somewhat, but a fogger bomb can act as a catalyst for bed bugs to hide and burrow more deeply into your beds, linen closets, clothes drawers, carpets, etc. Bed bugs are burrowers. If the bug bomb doesn’t spur them to move into another room, it’ll probably scare them into digging themselves more deeply into your things, making them harder to find and kill later.

Everyone always asks the question, “Are bug bombs safe?” The short answer is no; they’re not. No pesticide is “safe.” They’re all dangerous and can make you, your animals, and your children sick if they’re not handled and dealt with properly. However, insect foggers are less safe than many other products because they don’t just make people sick when mishandled.

When you activate foggers near pilot lights or open flames, they can cause fires or even explosions. That’s why you must read and follow all instructions on these products if you insist on using them.

They Can Make Things Worse, Especially in Apartments

We’ve already discussed how bed bugs tend to burrow more deeply and move to rooms with cleaner air after a bombing. That can make things worse, especially for people living in apartments. If one tenant with bed bugs bombs his apartment, his bed bugs may relocate to the apartment next door. Soon, the bed bugs can go from a single flat to infesting the entire apartment in this manner.

What Is the Best Bed Bug Bomb?

As you can probably tell from everything we’ve said so far, we’re not a huge fan of bug bombs, and we’d highly recommend you use a different product to deal with your bed bugs.

However, if you’re dead set on using one, the best bed bug fogger we’ve been able to find after digging through bed bug bomb reviews and conducting a little independent research is the Hot Shot Bedbug & Flea Fogger. It’s easy to use and more powerful than several other insect foggers on the market. It’s also not expensive at all. 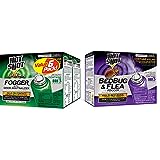 Most bed bug foggers use a substance called permethrin. In concentrated doses, the effects of permethrin can last up to six weeks. However, that’s assuming the bomb was effective when used. If it wasn’t, you might not see great results, and the ones you see may not last nearly that long.

What To Use Instead of Bug Bombs To Get Rid of Bed Bugs?

People often ask, “Do flea bombs work on bed bugs?” The truth is that most insect foggers all work the same way and have similar results. In fact, many companies now make bombs that are supposed to work on both bed bugs and fleas. The Hot Shot spray listed above is one such product. If you’re looking for an alternative to bed bug bombs, we’d recommend staying away from bug bombs altogether.

This step-by-step guide gives you great instructions for ridding yourself of bed bugs. It takes a lot of work, and it isn’t an overnight process, but it’s an effective one. Additionally, there are products and chemicals you can get to help. We recommend the following: 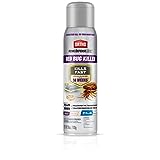 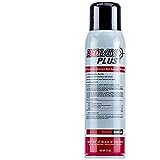 Bedlam Plus Bed Bug Aerosol, 1 can
Buy on Amazon
Sale 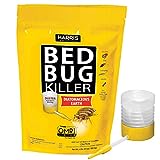 Related: How to Use Diatomaceous Earth for Bed Bugs

These products can assist you in getting rid of your bed bugs, but bed bugs are like lice: The only way to get rid of them completely is to buckle down and put in the work. Do some detailed cleaning, bit by bit, until they’re all gone.

So, do bed bug bombs actually work? Not as good as you’d hope.

If you’re going to use aerosol sprays, use handheld sprays that allow you to direct it where it needs to go. That way, you get down into the cracks and crevices where the bed bugs hide to spray them. Foggers just dust the whole area on the surface. To get rid of bed bugs, you need deep, detailed cleaning.