Firstly, it’s important to know that hawks have been protected in the United States under the Federal Migratory Bird Treaty Act since 1918. This means that it is illegal to hunt, trap, cage, shoot, poison, or kill them. Doing so can result in imprisonment and heavy fines.

Can you shoot a hawk if it is attacking chickens? You can shoot or kill a hawk only if you have a special permit from Wildlife Services. Additionally, shooting is authorized only in specific situations that involve public health and safety. Along with a permit, there are rules that you will have to adhere to before attempting to shoot a hawk.

Killing protected animals and birds without a permit can result in severe consequences. With hawks, offenders can face imprisonment along with a heavy fine. Nevertheless, hawks have proved to be a danger to poultry in the past, so let’s take a look at the best ways to resolve this problem. Let’s begin!

Why Can’t You Shoot a Hawk?

A hawk comes under a category of birds known as raptors (birds of prey). Raptors play an important role in balancing the prey species. In the food pyramid, a hawk resides on the top, while animals like squirrels, snakes, and rabbits (prey species), reside in the middle of the pyramid. The base of the pyramid is the habitat.

If the predatory species is removed from the top of the pyramid, the pyramid would fall out of balance due to the overpopulation of the prey species. A prey species, if left unchecked, can “eat itself out of house and home”, as the habitat can only feed and support a limited number of animals.

Without a balancing predator, prey populations can exceed its limit and result in an unpredictable chain reaction of consequences.

This is why we have laws that protect predators like hawks and owls from being harmed. The laws are our way to protect the balance of the habitat. However, in certain scenarios, you can obtain a permit that will allow you to legally shoot a raptor such as a hawk.

How Can You Shoot Hawks Legally: Information

In order to shoot a hawk, you will need to obtain a permit called the Federal Migratory Bird Depredation Permit.

Almost all birds (including their eggs and nests) that are native to the United States are protected under the Migratory Bird Treaty Act (MBTA). Additionally, the MBTA widened its scope in 1972 and protected certain international species like hawks and eagles as well.

A permit can be obtained if there is depredation or loss caused by these birds. Depredation covers damages incurred on agriculture, private property, protected wildlife, and human health and safety.

Additionally, these permits are only intended to provide a short-term solution for bird damage until you find a long-term, non-lethal solution to prevent the birds from damaging your goods. This implies that you will have to find a better solution to prevent hawks from attacking your poultry in the long run.

How to Obtain a Permit to Shoot Hawks?

If you want to apply for a permit to shoot hawks that are inflicting damage to your property, you will need to fulfill the following three criteria:

1. The applicant must be the one experiencing the damage.

2. The applicant is responsible for compliance with the permit (We will elaborate on the rules in the later section)

3. The applicant must have the authority to implement non-lethal measures in the near future.

Keep in mind that some states may require an additional permit apart from the FMBD permit.

Once you’ve submitted your application, it will undergo processing and if it is valid, you will be given a permit to shoot hawks, which will be valid for one year.

After you get your permit, there are a few more rules you will need to abide by. They will refrain the individual from breaking the law. The following are the rules:

2. The shot needs to be fired from the shoulder and only within the area described by the permit.

3. You cannot use blinds or any other means of concealment.

4. You also cannot use decoys or calls to lure birds within the shooting range.

Getting a permit can be a long and tiresome process. In the meantime, you may need to come up with non-lethal methods that can either protect your poultry or scare off hawks. Let’s have a look at some safe methods below:

Free-roaming chickens and ducks can be easily attacked by hawks and other predators. Try investing in durable fence enclosures that can be installed in your compound. If you’d like to do it yourself, use poultry wire and nylon nets over a wooden framework to keep predators at bay.

There is also a DIY video that walks you through the process of building a chicken coop.

Use Loud Sounds to Keep Hawks Away

Though this may not be a very effective solution, you can give it a try if everything else fails. Let’s take a look at a few ways you can intimidate hawks:

The safest and loudest noise you can make to scare a hawk is with an air horn. SeaSense Air Horn Jumbo is a product that is used in forests to scare off bears and other wild animals. 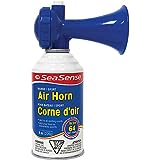 This horn is loud enough to startle and chase away hawks if and when they attack your poultry.

Modify the Habitat Around Your Home

This may seem strange, but altered habitats can prevent hawks from constantly attacking chickens. Removing perches from where they can survey your home for an opportune moment to attack, greatly reduces the number of attacks. This can be done by cutting down snags and trees where you commonly find predators perching before they attack.

There are many commercial anti-perching devices available. These products usually have spikes that help deter hawks and owls from perching on them. This can be installed on poles or other man-made objects which might provide a hawk with a convenient perching site.

Aspectek Stainless Steel Bird Spikes is an effective way to make your home and habitat repel hawks. These spikes are made out of stainless steel and can be used to effectively keep any pest or predator at bay. 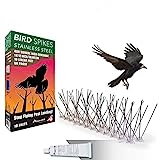 In conclusion, from a legal standpoint, you can’t shoot a hawk unless you have a permit to do so. If you do have a permit, make sure you follow the rules that come along with having it.

However, if you don’t have a permit, be sure to make use of our non-lethal measures to keep hawks at bay. For more pest-related content keep following our site!

Hiltunen T., & Laakso J., (2013), The relative importance of competition and predation in environment characterized by resource pulses–an experimental test with a microbial community, University of Helsinki

What are raptors?, Missouri Department of Conservation