Animals are almost always culprits when it comes to various bug infestations. Whenever we see bugs or dirt in our homes, we tend to think that our dogs or cats did it. Fortunately for animals, they’re not always culprits, as most of the pests can infest your house even if you don’t have any animal inside.

Our primary example is bed bugs. Bed bugs can attack your home even if it’s clean, tidy, and smells fresh like blooming flowers. To make matters worse, bed bugs are ultimate bloodsuckers and they will feed on every living being, including your animals or pets.

Can animals carry bed bugs? Animals don’t carry bed bugs but these pests can feed on them. Theoretically, there is a slight possibility of an animal with thick fur bringing in one or two-bed bugs when it goes outside to the infested area and later goes back into your house but in the real-life scenario, this is less likely to happen or happens very rarely.

One thing to note bed bugs don’t live outside, even though they can survive the harsh nature of both cold and hot weather. This means that the animal would have to go into a bed bug infested house and the likelihood of this scenario happening is equal to zero.

Okay, now that we got this out of the way, let’s examine the connection between bed bugs and animals and see if you can protect your animals from bed bugs in case of infestation.

Well, bed bugs are domestic bugs and they don’t live outside, so the chances of animals carrying bed bugs inside are pretty slim. If bed bugs are going to attack an animal, it will be the animal that’s closest to them but this happens rarely.

Bugs that attack animals are sometimes different than those that attack humans. For example, an animal tick. This bug attacks an animal drinks its blood until it gets swollen, and when it’s full, it leaves the animal. In some cases, this tick can be so swollen, that it can “explode”. However, this tick isn’t the same one that attacks humans.

The tick that attacks humans is different. It’s much smaller and doesn’t get swollen as the animal one. Flees are also something that many animals have, especially ones that aren’t kept properly. These can also infest your house but it happens very rarely and isn’t that severe.

Yes, bed bugs do bite animals. Bed bugs won’t hesitate to drink blood from any host, much like vampires. If there’s a host, they will attack it. This means that alongside you and your family, every animal is endangered in the place of infestation.

Remember that famous movie Interview with the Vampire, where Lestat eats a mouse because he’s hungry for blood? Well, bed bugs aren’t different.

Can Bed Bugs Live on Animals?

If you know a thing or two about bed bugs, you know that they prefer quiet, dark, and peaceful places to live. This is why they primarily infest your bed, to be precise, your mattress. The mattress is dark, peaceful, and even if you move around it, this wouldn’t disturb them.

As for the animals, some of them seem like a perfect shelter for bed bugs. For example, long-haired dogs. While it seems logical that they would live there, it’s impossible in real life. This is because your dog is all but quiet and peaceful. Dogs are one of the most active animals that move around during the whole day, making a life for bed bugs tenfold harder.

Sure, they might bite your dog while he sleeps but living on a dog or any other animal is pretty much impossible.

Finding bed bugs in your home is already a terrifying thing to behold but just imagining animals spreading bed bugs all over the place is even more terrifying. However, animals don’t have any way to spread them, unless bed bugs infested them.

As said earlier, bed bugs will occasionally feed on animals but when it comes to infestation, that’s not possible, as animals move frequently. Bed bugs can already spread pretty quickly on their own and they don’t need any animal to do that. In fact, animals can’t spread them at all.

Bed bugs are masters of bloodsucking but they aren’t on the top of the feeding chain. Believe it or not, bed bugs can be eaten by other insects, making them not so powerful in comparison to other pests.

As for large animals, no animal eats bed bugs. Only mites, spiders, ants, centipedes, and cockroaches do that.

Domestic animals are bigger victims of bed bugs, compared to wild animals. The reason is obvious – because they live close to your house or inside. You’ll find no bed bugs in the wilderness, making wild animals completely safe from these bugs.

Your house is a whole different situation. They have plenty of space to move around and at night, they have a solid meal. If you keep your animals outside of your house, chances of them getting bitten are small, except if you let them inside during the night to sleep.

As we can see, bed bugs pose a threat to every living being in your house. If you want to keep your pets away from your infestation, the least you can do is to keep them outside while you deal with it.

How to Treat Animals for Bed Bugs

There isn’t any specific method of treating animals bitten by bed bugs. However, you can treat their bedding or place of living. Bedding can be washed in a washing machine or treated using a dryer, for example.

Some animal owners are worried about chemical treatments, which can also be used but not every animal is susceptible to its effects. Let’s take dogs and cats as an example. Some chemical applications require your animals to be out of your house for a couple of hours. In the case of very strong chemicals that require fumigation, your whole family will need to get out for a few days.

Animals such as reptiles and birds are more sensitive to these chemical effects, so you want them out of your house for more than a few days, in case you use strong pesticides. The best way to treat bed bugs in animals is to treat their place of living first, either by washing their bedding or using pesticides to eliminate bed bugs.

Always keep your animal away from the treated place, as certain chemicals from some pesticides can harm the animals, especially those more sensitive to them. 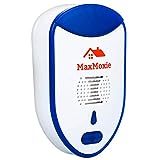 MaxMoxie pest repeller is perhaps one of the best and the most popular repellents out there. If you take a look at its reviews, you’ll see close to 2000 users who bought this product, which says all about its quality.

It’s not a spray or pesticide but rather an effective ultrasounds system that emits ultrasound, perturbing and disorienting pests, spiders, and mice. The great thing about this one is that it’s inaudible and is 100% safe for your kids and pets. So, how does this device help your pets?

It helps by driving away bed bugs from your pet’s space. If there’s an electrical outlet close to your pet’s bedding, plug it in there. The manufacturer also offers a 30-day return, in case you’re not satisfied with your product. However, buyers were in most cases satisfied and we believe you will be as well.

Check out the current price for MaxMoxie Ultrasonic Pest Repeller on Amazon.

Dust mite spray from Violet Twig Aromatics comes in a beautiful 40-oz bottle and is a great bed bug spray. It’s a natural product, meaning that no harmful chemicals are there, so it’s safe for your animals.

The recommended use is on furniture, carpets, pillows, mattresses, and pet beddings, so it’s perfectly suitable for animals. This spray also smells pleasant, boasting a clove-cinnamon scent with a refreshing note.

Check out the current price for Dust Mite Spray on Amazon.

If you, for some reason, don’t like diatomaceous earth, here’s a bed bug powder from Cedar Bug-Free that might ring some bells. Coming in a huge 3-pound jar, this powder is perfect for killing everything from fleas and ticks to mites, bed bugs, and other bugs.

It’s meant for carpets but we found that it eradicates bed bugs from animal beddings, too. It’s free from diatomaceous earth and instead, it uses cedar, which is a great natural product, sometimes also used for guinea pig beddings.

Check out the current price for Bed Bug Powder on Amazon.

Are Bed Bugs Attracted to Animals or Do They like Humans More?

Bed bugs bite humans much more often than animals. Since they live in the bed you’re using, you’re the primary target. However, if your animal sleeps close to you, it can also be a target. Bed bugs like living close to their host, regardless of its type.

Since bed bugs are our problem, we tend to get bitten more, hence we can say that bed bugs like humans more than animals.

To summarize, animals can also get bitten by bed bugs if they live in the same place as you. Having a bed bug infestation isn’t something you want to joke about, as bed bugs aren’t the pickiest eaters.

Can you get bed bugs from animals? No, you can’t. You can’t get bed bugs from any animal and the reason why bed bugs infest homes is still unknown, besides their hunger for blood. Chances of getting bed bugs are higher if you live in the rural area of your country, especially areas where people often dump their trash.

Bed bugs can also infest buildings and houses in urban areas, meaning that animals don’t have to do anything with it.

Everything that has blood represents a target for bed bugs and that also includes your animals. While there isn’t any particular treatment for bed bug bites on animals, you can prevent your animals from getting bitten by keeping them out of your house.