Scorpions are identified as very deadly because they have poison or stinger at the end of their tail. However, it is not true that all scorpions are dangerous. In fact, only about 25 out of 1,750 scorpion species are lethal. But unless you keep them as your pets, you should not have scorpions and their babies in your home.

But, how to get rid of baby scorpions in your house? Baby scorpions are very tiny and may be difficult to find in your house. To get rid of them, remove lumber, firewood, bricks, logs, and other unnecessary objects where they can hide, and place them outside. You should also remove their source of food and water.

To start with, scorpions are not insects. Instead, they are predatory arachnids and are nocturnal, so they are most active at night only. Interestingly, adult scorpions glow in the dark once you strike them with a UV light. However, baby scorpions don’t have this ability yet. Therefore, you may not see them in the dark. Continue reading to learn more about them.

What Does It Mean if You Find a Baby Scorpion in Your House?

Generally speaking, scorpions are unlikely to enter homes. Instead, they prefer living outdoors, usually under loose tree bark, leaf piles, and beneath the rocks. However, these creepy creatures may accidentally enter your house while searching for food and shelter, especially in the summer and during nighttime.

Scorpions are not known to invade homes. So, in case you find a baby scorpion inside your house, only a pair (male and female) of scorpions has likely entered. They could have squeezed their bodies to pass through very small openings, such as damaged window screens and tiny gaps around your doors.

Finding a baby scorpion in your house may also mean that there are also other babies hiding somewhere. Although it may take years before they become adults, nymph scorpions also have venom on their tails and may sting humans, especially small children. Therefore, you should act at once before it’s too late.

Baby scorpions look like small crabs. They resemble the adult ones but are pale and smaller. This is why they are called nymphs. Also sometimes called scorplings, these young scorpions have a soft outer shell called the exoskeleton. They also have four pairs of legs, a pair of sharp pinchers, and a very flexible tail.

How Are Baby Scorpions Born?

A female scorpion can give birth to 25-35 baby scorpions. They grow inside their mother and are born alive in semitransparent sacs. Therefore, they are not hatched from eggs as insects do. Once baby scorpions are born, they climb on their mother’s back as protection and to regulate their body temperature.

How Small Can a Baby Scorpion Be?

Depending on the species, adult scorpions can be between ½ inch and 7 ¼ (1.27 and 18.4 cm.) inches long, including the tail. On the other hand, baby scorpions are much smaller than adults. Nevertheless, their sizes depend on the species they belong to, but not necessarily on the size of their mother, which is usually fat.

What Do Baby Scorpions Eat?

Just like their adult versions, baby scorpions eat small insects, spiders, as well as other scorpions. However, they only eat the smaller ones. They use their stinger to paralyze prey. Once these nymph scorpions are already strong enough, they don’t need to sting their prey. Instead, they grab them tightly and eat them alive.

What Season Do Scorpions Mate?

Scorpions mate in different seasons, depending on where they are. Those living in temperate or moderate regions usually mate in the spring or summer. Scorpions in hotter regions mate during rainy seasons. Strangely, female scorpions usually eat the males after mating, unless they can escape.

How Often Do Scorpions Have Babies?

Typically, temperate scorpion species give birth during spring and summer while tropical scorpions give birth throughout the year. Females can have lots of growing baby scorpions on their backs, but not all of them will become adults. This is because their mother will eat some of them if food is not available.

How Many Babies Do Scorpions Have?

Depending on the species, scorpions give birth to between 25 and 35 baby scorpions at a time. The exact number of baby scorpions will depend on the size of their mother. This means that the bigger the mother, the more baby scorpions she can have. In some cases, a female scorpion can have up to 100 babies in a single brood.

How Long Do Baby Scorpions Stay With Their Mother?

After baby scorpions are born, they spend about 2 weeks on their mother’s back. They undergo first molting during the first week and molt again in the second week. Once their skin becomes hard enough, they leave their mother to live independently and search for food and shelter. Moreover, scorpions are solitary creatures.

Baby scorpions sting just like adults. However, they don’t sting yet while they are still at the back of their mother. They only start to feed once they are old enough to live on their own. Immature scorpions undergo several molting periods, and it may take 1 to 6 years before nymphs can become full-grown adults.

Baby scorpions are poisonous. But again, only a few scorpion species are dangerous. Also, the stinger of venomous scorpions cannot kill healthy adults. Instead, the most vulnerable ones are young children and people who are allergic to sting. Nevertheless, scorpions only sting when they feel threatened.

Is It Bad to Kill a Scorpion?

It is not bad to kill a scorpion. However, you should only kill them if they pose a threat, especially to small children. If you find some scorpions inside your house, you can put them outside your house or kill them. If you see scorpions outdoors and far from your house, just ignore them. They are shy and will simply crawl away.

How to Keep Scorpions Away?

The techniques for keeping scorpions away from your property are almost the same as for pest insects. However, you should not touch or hold them with bare hands. Although most of them are not dangerous, venomous scorpion stings can cause paralysis, severe convulsions, breathing difficulties, and even death.

Scorpions don’t build nests indoors. But if there are scorpions in your house, they may crawl on your bed at night and will sting you if you suddenly wake up. Therefore, the key here is to stay calm and don’t scream. Instead, move very slowly and keep them away from you. Here are some of the things you can do:

To capture the scorpion, you can do the following:

Step 1: Get a small glass or jar and place it over the scorpion.

Step 2: Place a piece of cardboard, hard paper, or any thin but strong material under the jar.

Step 3: Invert the jar until the scorpion falls to the bottom of the jar.

Step 4: Secure the lid of the jar so the scorpion cannot escape.

Step 5: Put the scorpion outside your house, far enough so it would not be able to return.

Note: Depending on the size of the scorpion, you can also carefully pick it up using a long pair of forceps or any tool that can be used for picking up small objects.

Aside from food, scorpions enter homes also to find shelter. They can jump and climb on rough surfaces. However, they are very sensitive to heat and lights. Therefore, declutter your house and reduce its potential hiding spots. Once scorpions feel uncomfortable inside your house, they will automatically leave.

3. Remove their source of food and water.

As mentioned earlier, scorpions eat spiders, lizards, bugs, and small insects. Therefore, destroy all cobwebs and make sure they have nothing to eat inside your house. However, scorpions can survive for a year without food but may die quickly without water. Hence, you should limit their source of water and moisture.

Related: How to Get Rid of Scorpions? | Complete Guide

Are There Traps for Scorpions?

There are traps for scorpions, such as glue traps  or sticky traps . These non-poisonous scorpion traps are readily available online and can also be used to trap spiders, ants, and roaches. Alternatively, you can use a burlap bag, a “breathable” fabric that can absorb moisture. Scorpions are very attracted to it. 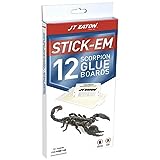 Baby powder can kill scorpions. Also known as talcum powder, baby powder kills scorpions by suffocating them. Once a scorpion is trapped on the glue trap, squirt some baby powder on it directly, and it will surely die. However, baby powder products may not work effectively if the scorpion is crawling freely on the floor.

Does Lavender Keep Scorpions Away?

Lavender can keep scorpions away because of its strong smell. Having some lavender plants around your house can repel scorpions, as well as some pest insects. You can also use lavender essential oil as a natural repellent against scorpions. Simply mix it with water and spray directly on them.

How Do You Get Rid of Scorpions Naturally?

Pesticide products are not recommended for killing scorpions because they are not always effective. These creepy creatures have a hard body, and they can easily hide in cracks and crevices. Also, some pesticides contain harmful chemicals that children and pets can inhale, especially when sprayed indoors.

As mentioned above, removing the source of shelter, food, and water of scorpions inside the house is as effective as trapping them. However, you also would want them to be out of your yard and prevent them from entering your property. Therefore, here are some other natural ways to get rid of scorpions:

When it comes to venomous species, baby scorpions are as dangerous as adults. And because they are smaller and they don’t glow in the dark like the adult ones, getting rid of them can be very challenging. Although it’s unlikely to see lots of them inside your house, they could be in your yard and sting people.