Scorpions are some of the oldest creatures known on earth and are true survivors. These nocturnal arachnids typically stay out of sight, taking shelter in cracks and crevices. However, if they find a food source in your home, you may be seeing more scorpions than you would like.

How to get rid of scorpions? To get rid of scorpions, first, make sure you eliminate their food source to discourage them from returning. Once your pest problem is under control, you can use repellents, sprays, or traps to kill any remaining scorpions. Finally, seal off the crevices they may enter through to keep them away.

In the rest of this article, we’ll look at these arachnids in more detail. We’ll also talk about their diet and patterns so you learn how to keep them out of your home. Let’s take a look at what you can do if you find yourself with a scorpion problem.

What Is a Scorpion?

Scorpions are arachnids that have a long history dating back over 435 million years on earth. There are over 1,500 species of scorpions around the world, meaning this invertebrate has plenty of variety across hemispheres. They can be found on each continent, excluding Antarctica.

Scorpions look like tiny lobsters with eight legs and a signature stinging tail. They have sensitive hairs rising off their body, a set of pincers, two eyes on top, and two to five sets of eyes on their body sides. They come in red, black, and brown colors. Some varieties can even glow in the dark.

How Many Legs Does a Scorpion Have?

As an arachnid, a scorpion always has eight legs. The most recognizable is the first pair that carry the scorpion’s pincers. These resemble little lobster claws and are a key in the scorpion’s predatory abilities. It relies on its pincers to grab its prey and crush as needed.

How Many Eyes Do Scorpions Have?

Scorpions can have up to 12 eyes, depending on the species. They always have two eyes on the top of their body, but they have a varying amount of lateral eyes. They will have at least two pairs of these lateral eyes and as many as five pairs.

Although they have so many eyes, scorpions are not known for their vision. They struggle to see clearly. They mostly perceive general movements and light versus dark.

Where Do Scorpions Live?

Scorpions live most commonly in hot, dry climates. Though they can live in a variety of climates, their typical habitat is a desert or other similar surroundings. They like to hide in crevices and under rocks, wood, and other natural debris.

How Long Do Scorpions Live?

Scorpions typically live for about three to five years. However, this is only an average, and a scorpion can live much longer. Environmental factors will contribute to the lifespan, and female scorpions tend to live longer than males.

What Do Scorpions Eat?

A scorpion’s diet consists mostly of insects, spiders, small critters, and sometimes they will even eat other scorpions. However, eating other scorpions is typically a last resort. They are predators that use their venom to paralyze their prey and use their pincers to catch and prepare their food.

These arachnids are some of the oldest living creatures on earth, dating back to the dinosaur era. The number of species reaches over a thousand, but these are organized into larger family types.

At this point, you may be wondering, “Are all scorpions poisonous?”

While all scorpions are equipped with a stinger in their tail, their level of danger varies greatly. There are a few scorpions that could kill a human with their venom. Children and the elderly are at greater risk, but there are still some instances of scorpions killing healthy adults.

The most poisonous scorpion is the Arizona Bark Scorpion, followed by the Fat-Tailed Scorpion. After these, the most dangerous are the Deathstalker, the Brazilian Yellow Scorpion, and the Indian Red Scorpion.

For all of these scorpions, they tend to sting humans only as a last resort, such as when they feel threatened. If you accidentally step on them, you would be in danger of its stinger. The scorpion knows that humans are not prey, so they will not actively come after you.

Scorpions can be deadly, but getting stung does not always translate into receiving a lethal dose of venom. Likely, you’ll notice some swelling at the sting site, and it may feel painful or numb. If you’re stung by a more poisonous scorpion, you may exhibit erratic movements and muscle twitches.

A scorpion sting will make the skin look swollen and reddish. Depending on the sting, the swelling and redness may be localized, or they may surround the area where you were stung. These symptoms usually come within the first five minutes after the sting.

How Long Does a Scorpion Sting Last?

With a mild bite, the pain will likely subside after two or three hours. It should completely dissipate within 24 hours. You may experience numbness or tingling for a longer period, usually two to three days.

Scorpions are attracted by their prey because they want to feed and survive like all animals. They feed on insects, and especially termites. Even a small termite infestation can be enough for scorpions to move in. So, try to keep your home pest-free.

With no pests around, there’ll be no reason for a scorpion to nest in your home.

How Do Scorpions Get In the House?

Scorpions love small cracks and crevices and can locate these easily to enter your home. If there is any space under your doors, around your windows, or piping, they can easily use this space to enter the home. They can also crawl in through exterior vents to enter your home.

How to Kill a Scorpion?

Killing scorpions can be a bit of a challenge. These arachnids are born survivors, and methods that work on other pests won’t wipe out your scorpion problem.

However, the blunt force will do the trick. You should protect yourself if you want to stomp on an individual scorpion or smash it with a heavy item. They can sting you if you come too close to their poisonous tail.

How to Get Rid of Scorpions in the House?

Preventative treatment is key in keeping scorpions out of your home. Stay up-to-date on your pest control. Eliminating their food source will keep them away in the first place.

You can choose a natural scorpion repellent or a chemical option to deal with scorpions that have made their way inside.

How to Kill Scorpions Around Your House?

If you’re up against a scorpion infestation in your home, you may need more methods than pure blunt force to get the job done. You may be wondering how to catch a scorpion, but luckily you don’t necessarily need to make direct contact to kill it.

You have a variety of options and methods when it comes to killing scorpions around your house.

To repel scorpions, you can choose a chemical or natural repellent or spray. There are plenty of products on the market you can spray and apply in your home to kill the scorpions you have and keep any new ones away. Use the chemical ones with care, as they can be dangerous for pets and children.

There are plenty of scorpion repellents on the market that can help keep scorpions away.

If you’re searching for the least harsh option, this Cedarside Scorpion Shield from Amazon is all-natural and pet safe, letting you use it worry-free. 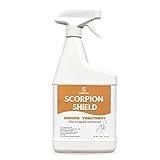 Plenty of spray products help you eliminate scorpions once and for all from your home.

For example, the Harris Scorpion Killer Spray from Amazon is EPA approved for indoor use. This liquid won’t damage your home’s interior while being efficient at killing scorpions.

Try to use this spray where you have seen scorpions in your home and where you think the scorpion nest might be.

If you want to place some traps on scorpions, you’ll want to choose a sticky glue trap.

The Catchmaster 72MAX Pest Trap from Amazon is a good example. The strong glue trap will hold any scorpion that wanders across one.

Home Remedies to Get Rid of Scorpions

After reading all of these harsh, chemical options, you may be wondering, “What kills scorpions naturally?”

The most common DIY option to deal with your scorpion problem is using essential oils.

Cedar, peppermint, lavender, and cinnamon oil are all known to have a repelling effect. You can dilute these strong oils and add them to the areas of your house where scorpions mostly lurk.

Luckily, most scorpion stings are mild and don’t require emergency medical treatment. The majority of scorpion venom will give you one of these mild stings. You can treat a mild sting at home without seeking additional medical care.

However, if you think you’ve been bit by a deadly scorpion or you are experiencing more severe symptoms, contact a medical professional immediately.

How to Treat a Scorpion Sting?

For a mild scorpion sting treatment, wash the area gently with soap and water. If you’re experiencing a lot of pain, you can take over-the-counter pain medicine and perhaps apply a cold compact to the sting site. The worst of the pain and swelling should pass within 24 hours.

One popular home remedy for scorpion bits is a freshly cut onion. Slice the onion and apply it directly to the scorpion bite.

People swear by this at-home remedy to swelling and pain relief related to their sting.

How to Keep Scorpions Away?

If you’ve had a scorpion problem in the past and are looking to keep them away, make sure to seal off their favorite entrances.

Check for dark crevices around your doors and windows. Scorpions love these openings, and sealing them off will keep them from entering.

Scorpions can be a frightening pest at first glance, but even if stung, you’ll likely recover without much struggle. To avoid scorpion problems in your home, keep your home pest-free and seal off any entry crevices. If stung by a scorpion, the pain will likely subside in a few hours. If not, be sure to seek medical help to avoid any complications.

Insects and Scorpions. (2018). Centers for Disease Control and Prevention.