You’d probably think of red velvet ants as part of the ant species. Because who wouldn’t? They aren’t called ants for nothing, right? But surprisingly, they are actually wasps! Also dubbed as “cow killers,” red velvet ants are known for their ability to cause painful stings on humans and animals. It is said that their bite is excruciating that it could probably kill a cow, hence their nickname.

But, are red velvet ants poisonous? Red velvet ants aren’t poisonous. Their sting may be toxic but not to the extent of killing humans and animals. Once these insects pierce your skin, you may feel a throbbing and sharp pain at the site of the bite but not to the point of causing paralysis or any type of physical incapacity. There are claims that the pain is similar to the sting of bees, which can last for almost half an hour.

However, there is a possibility that it may cause severe allergic reactions in some people. If the said allergic episode results in difficulty in breathing, low blood pressure, increased pulse rate, wheezing, and trouble in swallowing, the person bitten may be experiencing anaphylactic shock, a life-threatening condition that requires immediate management and intervention.

Now that we’ve discovered the wrath of red velvet ants in causing painful and agonizing bites to humans and animals, let us cover their traits and behavior, the ways in getting rid of them, and the remedies in treating their bites.

Red velvet ants are not ants but a type of wasp. They belong to the family Mutillidae, order Hymenoptera, class Insecta. They are usually mistaken as ants because of their similar appearance, although they may have distinct and separate traits.

Red velvet ants are about ¾ inch in length and have black color and orange to red patches of hair on the abdomen and thorax. The females are wingless but can cause painful bites, while the male species have wings but don’t usually sting. Both of them have dense hair.

Moreover, male red velvet ants are the only ones who can fly. They are the only species that have translucent wings because the females have no wing structures and are flightless.

Red velvet ants are not extinct or rare in number. However, it is uncommon to see them. This may be because they’re solitary and will hurriedly hide if they detect the presence of humans and predators. Also, they do not congregate in groups or assemble in colonies, so you seldom see these creatures.

Where Do Red Velvet Ants Live?

These wasps prefer to crawl in pastures and open fields with sandy soil since it gives them a higher chance of preying for food. They are typically seen during the warm season and are not commonly found inside houses or garages except when there are significant changes in weather that force them to search for shelter.

What Do Red Velvet Ants Eat?

Red velvet ants consume nectar and water, similar to any type of bee and wasp. However, juvenile velvet ants may feed on the larvae, pupae, and cocoons of their hosts since they are hatched on the habitat of the latter.

They can sting on pets such as dogs, but they are not generally harmful. Although their bites may turn out to be painful, they will not cause death or serious complications to these animals. However, when these pets have sensitivity to the venom of red velvet ants, they may suffer from allergic reactions that may be mild or severe.

Red velvet ants can sting, although only the females can bite because the male species don’t have stingers.

How Painful Is a Red Velvet Ant Sting?

The female red velvet ants have long, needle-like stingers that have a size of almost half of its body. It is said that the bites of these wasps can be extremely painful that they could probably kill a cow, earning them the nickname “cow killers.” However, this is not always true, as cows don’t usually die when bitten by red velvet ants.

Furthermore, these creatures only sting humans and animals when they are in jeopardy. They are typically solitary and non-aggressive and will only sting once provoked or put in serious threat and danger.

What Happens if You Get Stung by a Red Velvet Ant?

If you get stung by a red velvet ant, you will feel an intense and burning pain on the site of the bite for up to half an hour. Their venom contains amines, enzymes, and small peptides that activate and trigger the serotonin and acetylcholine receptors. These are neurotransmitters that play a big role in activating and triggering the pain sensation of the body.

Other than that, certain peptides induce the release of histamine through degranulating mast cells that initiate hypersensitivity reactions. Although severe allergic conditions are uncommon according to reports, anaphylactic episodes are still possible and may even lead to serious complications and death if not treated right away.

Furthermore, the person or animal that was stung by a red velvet ant may also experience swelling and redness at the location of the bite.

How to Treat a Red Velvet Ant Sting?

If you are stung by a red velvet ant, it is recommended to employ the following measures:

How to Get Rid of Red Velvet Ants?

Since red velvet ants are solitary insects, you won’t normally see them everywhere. They do not group themselves in colonies, so it would be difficult to track their movements. However, they can reach your home if the temperature outside changes, and they want a safe space where they can continue doing their activities. In this case, you may accidentally encounter them, and in return, they will sting as part of their defense mechanism.

If you notice them in larger numbers, you will need insecticides, repellents, baits, and traps in getting rid of them. Home ingredients like pepper, cinnamon, white vinegar, citrus fruits, coffee grounds, and mint provide a convenient and natural way of eradicating these wasps. On the other hand, insect baits comprising of borax, cornmeal, sugar, and boric acid can also be an excellent strategy in getting rid of red velvet ants.

Related: How to Get Rid of Red Velvet Ants | Cow Killer Ant Facts

The following are the products that can effectively kill and exterminate red velvet ants:

If you want to experience actual relief from wasps and hornets, then this product from Spectracide could just be the answer. It contains potent chemicals that can kill insects by making their nests lethal and dangerous for present and returning pests. For maximum effect, it must be sprayed during sunset, as this is usually the time when insects are no longer active. 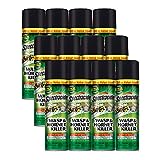 This product contains bifenthrin and zeta-cypermethrin that can instantly kill ants, fleas, cockroaches, ticks, and other insects. It is safe to apply in indoor areas as it is non-staining and odorless. Also, it can prevent new insects from developing for a period of up to twelve months, so you would get your money’s worth.

This insecticide is one of the best options if you want a fast and convenient way of deterring red velvet ants. It can kill insect pests that come in contact with its contents. With its orange breeze scent, it can be used both in indoor and outdoor settings. 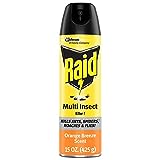 The Harris diatomaceous earth is known to be a potent insect killer due to its sharp powder contents that can slice off the bodies of pests when ingested. It is made from 100% freshwater diatomaceous earth from Nevada, which means that no artificial fillers and additives were added to the solution. Also, it works as an insect killer for a long period of time as long as it is kept dry. 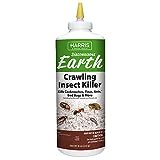 If you are looking for an insect killer that can effectively kill a variety of insects within 24 hours, then this product from Bioadvanced is the best choice. It is perfect for soil and turf lawns and can cover up to 5,334 square feet of property. Also, it is safe to apply and can be used for up to three months.

It is not every day that you meet a red velvet ant, but this does not mean that you have to be complacent. If put in a dangerous situation, they will not hesitate to bite you and cause excruciating pain. Thus, always be vigilant with your surroundings and regularly maintain the order and cleanliness of your place.

Related: How to Get Rid of Ants | Ultimate Guide