At first glance, crickets and grasshoppers may appear very similar. For someone whose eyes aren’t trained, it would be difficult to tell these insects apart.

Although crickets and grasshoppers look like the same insect, several traits would distinguish one from the other. This article will examine the distinguishing features to aid in identifying whether an insect is a grasshopper or a cricket.

What’s the Difference Between Grasshoppers and Crickets?

Learning the difference between grasshoppers and crickets would also require knowing their similarities in order to get familiarized with their appearance and behavior.

As with all insects, the body of crickets and grasshoppers is divided into three sections: head, thorax, and abdomen.

The head carries two compound eyes, a pair of antennae, and their mouthparts. Attached to their thorax are the structures that provide locomotion, such as the legs and wings. The abdomen contains organs of digestion and reproduction.

Grasshoppers and crickets have six legs attached to their thorax; enlarged hind legs. These legs enable them to leap rapidly, especially when they are about to escape an enemy. Moreover, their hind legs have rows of spines, which provides them with a better grip of the surface while hopping.

The grasshoppers are diurnal, mostly active during the day, but their activity diminishes during cloudy weather. Crickets, on the other hand, are nocturnal. Crickets will feed at night and will take refuge in warm, dark areas during the day.

Crickets sing by means of stridulation or rubbing two parts of their body against each other. The sound is produced as the row of teeth (scraper) on the wings’ bottom edge rub against the file-like structure on the other.

Male crickets sing to attract female crickets. However, when they come in contact with another male cricket, they typically produce a different song, which entomologists refer to as a “fight song.”

On the other hand, grasshoppers produce sound in three different ways:

Grasshoppers perceive airborne sounds through the eardrum-like structure (tympana) located on their first abdominal segment. In crickets, the tympana are located on their front legs near the base of their tibiae.

Grasshoppers are primarily herbivorous or plant-feeders, while crickets are omnivorous/scavengers.

Other than plant foliage, crickets would also feed on other insects (living or dead) as well as decaying organic matter. As such, crickets could typically be seen in a wide range of habitats, even in areas with little vegetation, whereas grasshoppers are mostly found in areas and consume low-growing grasses or plants, including leaves, flowers, plant stems, and seeds.

Grasshoppers have pointed but curved ovipositors that open upward and downward. Crickets, on the other hand, have long, compound tube-like ovipositors.

The ovipositor is used to make holes in the soil or into a vegetation in preparation for egg-laying.

Grasshoppers do not prey on other insects. As herbivores, the diet of grasshoppers in the field mainly consists of plants and grasses.

Do Crickets and Grasshoppers Fly?

All grasshoppers are capable of flying, while some crickets are not.

How to Get Rid of Crickets?

How to Get Rid of Grasshoppers?

In the field, controlling grasshoppers is best done by preventing access to potential egg deposit sites. Eliminating these sites involve tilling the soil, which not only deprives them of breeding site, but also exposes their eggs to potential predators.

However, since this method might reduce soil moisture that affects plants, it must be carefully assessed whether the number of grasshoppers could no longer be tolerated.

An alternative method of protecting valuable plants is by installing netting, floating row cover, or similar materials to prevent grasshoppers from entering. However, this method is only suitable for small gardens. 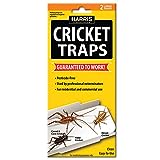 Adult grasshoppers and nymphs feed heavily on low-growing vegetation. Thus, to reduce their number, it is essential to keep the crops free of weeds. It will also make the field unattractive to grasshoppers since there wouldn’t be any food source once the eggs hatched.

Farmers should monitor populations of grasshoppers, especially the nymphs, to prevent future infestation. Detecting their presence early on would entail less use of insecticides when control is necessary.

If control is necessary, careful selection of insecticide is essential. Insecticides are highly effective in controlling the population of grasshoppers. These chemicals work best, especially when the grasshoppers are still small (nymphs), as they tend to be clustered in certain areas but are less effective when they become adults due to their high mobility.

Use of baits and border treatments are commonly done to keep the grasshoppers’ population in check. When using this method, inspection of potential breeding sites is also necessary to ensure proper placement. The most widely used bait for grasshoppers is the carbaryl impregnated on wheat bran.

If adult populations are infesting your field, reapplication of insecticide is necessary. Make sure to follow label instructions to determine the frequency of application and choose insecticides that are suitable for the field crops.

Bug sprays may also be used to eliminate crickets. Sprays are desirable and preferred as they provide access to hard-to-reach areas such as cracks and crevices where crickets are probably hiding.

Neem products are widely used to control grasshoppers. These products act as feeding deterrents, which reduce damage caused by foraging grasshoppers. Moreover, targeting nymphs with neem products may also be done. When applied to nymphs, it disrupts natural growth and eventually results in the death of immature grasshoppers.

Neem products are chemicals; however, people view these as natural control since they are essentially derived from plants, and therefore somewhat natural. 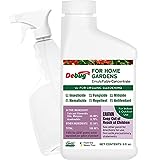 How to Make Homemade Grasshopper and Cricket Traps?

Sticky traps and water bottle traps are often used to catch grasshoppers and crickets. Although they are not as effective as other methods, these traps provide an estimate of the abundance of the insects infesting your areas.

Step 1: Grab a piece of cardboard and cut it into medium sizes, usually five by seven inches. Cut as many pieces as needed depending on the number of placement locations.

Step 2: The cardboard wrapped with duct tape may be placed on a newspaper to prevent the tape from sticking onto the floor.

Step 3: Place the traps in dark areas where crickets may be hiding, such as underneath refrigerators, furniture or bookshelves and other dark areas around the house.

Step 4: Bread crumbs may be used as bait to draw the attention of crickets.

Step 5: Monitor the traps regularly and dispose of the crickets to prevent other insects from feeding on them.

Step 1: Gather used or leftover water bottles, preferably 1 or 2-liter bottles, to allow more grasshoppers or crickets to fit in.

Step 2: Cut the top portion of the bottle.

Step 3: For grasshoppers, leaf or grass cuttings may be placed inside the bottle to act as baits. As for crickets, bread crumbs or sugar may be used for the same purpose.

Step 4: Invert the cut portion and place it back into the rest of the bottle.

Step 5: Secure the parts together with a little tape.

Step 6: Place the bottle on its side near places where crickets and grasshoppers may be found.

Step 7: Check your traps and dispose of crickets and grasshoppers that have been caught.

Here is a video about how to make a cricket trap:

Crickets and grasshoppers are often confused with being the same insects. They are members of the same order Orthoptera but belong to different suborders.

No matter how much these insects look alike, they have distinct characteristics that make one unique from the other. Primarily, these insects differ in appearance and habitat, and food preference.

For this reason, control of these insects, in cases where they turned out to be pests, would also differ.