These worm-like creatures could be fly or moth larvae, or even adult pinworms which can be potential culprits that can pose risks to homeowners and tenants.

What are the white worms crawling up the walls? They are most likely fly larvae. However, they could also be moth larvae or pinworms. Check your home for rotting food, exposed waste, and sugary spills to get rid of these pests. These tend to attract flies and their larvae.

The first step to getting rid of white worms is to identify them. Knowing what you’re dealing with will help you choose the best solution.

What Are White Worms?

White worms are usually insect larvae, most commonly of flies and moths. These larvae can appear almost anywhere, as a little rotting organic material (such as a kitchen trash bin) attracts fly larvae, and dark, confined spaces tend to attract moth larvae.

However, there are also parasitic worms, like pinworms, which may look white or cream-colored.

But if you see white worms in the house crawling up the walls, there’s a decent chance you’re dealing with common maggots. After all, pinworms only appear after infesting a host’s digestive system.

There are 3 types of white worms that you may see inside your house:

Each has a preferred habitat and a distinct appearance, helping you better identify and eradicate them. For example, fly larvae can be about 5 mm (0.2 inches) long, while female pinworms can grow up to half an inch (13 mm) in length.

Additionally, larvae usually prefer dark places near food sources. Thus, they can be found in kitchen cabinets, wet carpeting, and moldy walls. Parasitic pinworms only appear around the anus of infected mammals and people. These worms can also be found on pet beds or undergarments.

Essentially, a bit of cleaning, investigation, and repair can combat these types of white worms (moth and fly larvae).

For pinworms, however, medical or veterinary intervention is necessary.

Why Are White Worms Crawling on Walls?

Maggots are more likely to crawl up walls and into dark, wet places until they’re ready to become mature flies. Either way, crawling up the wall is a form of protection.

When a common housefly decides to reproduce, it lays its eggs within or atop decaying things. Generally, flies are attracted to any foul-smelling source of decay, and they typically breed in compost heaps, dog droppings, and trash bins.

Alternatively, fruit flies seek out sugary substances and fallen fruit. Their larvae are also called maggots or mealworms, which are short white insects that tend to scoot about like blind caterpillars. So if you have rotting food, waste, or fruit inside your home, you may unintentionally welcome flies and their larvae into your home.

When these larvae begin to mature, they can travel around your home, typically via walls. If you see white worms crawling on your walls, you’ll need to investigate to see where they’re coming from. From that point, you can remove the thing that’s attracting the larvae and remove them when you see them around your home.

What Attracts White Worms to Your House?

Consequently, houseflies might be able to tune into specific chemical agents, such as methane, sulfides, and cadaverine. If you toss your leftover scraps or meals into your kitchen trash can, the remaining food can begin to rot, attracting gnats, roaches, and flies.

Of course, fruit flies are attracted to sugary substances, not rot and decay. According to researchers at the University of Michigan, fruit flies have particular genes that can help them detect the presence of sugar.

Still, they tend to be a little less accurate about finding food sources. As a result, fighting fruit fly infestations can be easier than combating houseflies and their larvae.

Still, an unclean house is often the most common cause of fly larvae at home. For example, if you have open trash bins, uncleaned spills, or rotting leaves around your home, you may see an uptick in white worms on the walls.

Which Rooms Are Most Attractive to White Worms?

White worms tend to gravitate toward kitchen areas. Fly larvae, for example, can be found living in rotten produce, meat, or in your kitchen trash bin. Fruit flies and their offspring may be attracted to the fresh fruit on your counter or an old soda spill.

Even moth larvae, the second-most common cause of white worms in the house, can be found in the kitchen. In fact, the cause of many home moth infestations is infested pre-sealed grocery store items.

Bags of cereal, sealed boxes of noodles, and other everyday pantry staples can harbor moth larvae. Therefore, always check your food supplies before opening a new container. Consider investing in seal kitchen trash bins and keep rotting or moldy food out of your fridge.

Moth Larvae vs. Maggots: What Is the Difference?

Telling the difference between moth larvae and fly larvae (maggots) can be challenging. Both resemble white worms and can have small, dark-colored heads. However, you can differentiate them by observing their size.

The difference between moth larvae and maggots is moth larvae tend to have larger, darker heads. They also look slightly pink, yellow, or orange in hue compared to the cream color of maggot bodies.

Still, according to researchers at the University of Florida, housefly larvae are often a creamy white color, mirroring the look of moth larvae. So if you spot either type of larvae, it’s best to remove them from your home as quickly as possible.

How to Get Rid of White Worms in Your House?

If you’ve got maggots crawling around your walls, do the following:

If you spot white worms clinging to your ceiling, you may not be amid a maggot infestation. Instead, you could be dealing with moth larvae. To get rid of moth larvae, use an effective pesticide spray and a broom. Here’s how to do it:

Step 2: Wait for them to fall. Those that haven’t formed strong attachment points to the ceiling may immediately crumble and fall to the floor. However, some may resist dropping, necessitating some broom action.

Step 3: Vacuum your floor and any nearby furniture.

Best Products for Getting Rid of White Worms

The best products for getting rid of white worms can exterminate maggots, moth larvae, and pinworms. Choosing the right option for you depends on the exact type of worms on your walls and in your home.

When exterminating maggots, you can use a helpful trash can pesticide like the Terro T800 Garbage Guard . This attaches to your trash can lid, filling the container with toxic fumes that kill fly larvae, moths, spiders, and roaches. 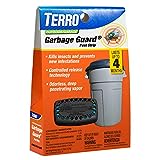 However, this won’t get rid of maggots on the walls. For that, you’ll likely want to invest in a permethrin-based spray. Permethrin is a common pesticide that causes severe neurological damage to insects. But it’s relatively safe around humans and pets. Still, households with cats should be careful when spraying permethrin products along the walls or carpeting.

You can use the diatomaceous earth in the pantry and cabinets for moth larvae and Reefer-Galler SLA Spray . The sand-like diatomaceous earth will help prevent recurrent moth infestations, while the spray will knock and creep larvae dead on the spot. 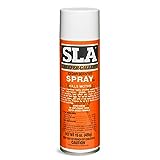 White worms crawling up the walls of your home may be a sign of rotting food, feces, or a decaying animal. In most cases, these tiny worms are fly larvae. These maggots eventually become adult flies, so it’s crucial to find their source and remove them as soon as possible.

Of course, some white worms may be moth larvae, which pose a slightly lesser risk than maggots. Still, you don’t want insects taking over your home, which is why it’s crucial to keep your home and surrounding environment clean.