Palmetto bugs are common pests that can be found almost anywhere, especially at home. Some people can be terrified knowing of them lurking inside the house. Some of you may be unaware that the cockroaches you’ve feared could be palmetto bugs. Fortunately, there are several steps to get rid of these terrifying pests and keep them at bay.

How to get rid of palmetto bugs? To get rid of them, use insecticides, cockroach baits using borax, or homemade sprays. Essential oils such as peppermint, oregano, catnip oil, rosemary, cedar, and eucalyptus oil can be used. Make a spray of water combined with dish soap and keep the house clean, dry, and sanitized at all times. Hire a pest management professional if the infestation has gotten out of hand.

Cockroaches, such as palmetto bugs, can be unpleasant inside the house. Learning more about them and understanding their nature and habits can help prevent infestations and help decide how to get rid of them.

In this article, we’ll go over more about palmetto bugs, including what they look like, how they behave, and more ways on how to get rid of them.

What Is a Palmetto Bug?

Palmetto bug refers to a kind of cockroach known as the American cockroach or Periplaneta Americana. They are also known as water bugs.

This is also considered the biggest type of cockroaches. Additionally, palmetto bugs prefer damp and moist environments. They are commonly found under plants, palm leaves, sewers, and moist woodpiles. However, they are common inside houses, looking for food and water.

Palmetto bugs range in color from reddish to brown. They range in size from 1.5 to 2 inches. Also, they have light patterns on their heads with a pair of antennas, and their back is covered with their wings. Lastly, they have a total of six legs, each with numerous spikes.

Palmetto bugs are not aggressive and are not known to bite humans. However, there are few instances that they bite or nibble on humans. This happens if there is no other food source.

Another scenario is that there might be food stains on people, and palmetto bugs try to eat them and scratch humans in the process.

Palmetto bugs have wings and can fly. However, they are one of the types of cockroaches that prefer to crawl than to fly. Nonetheless, palmetto bugs can fly short distance and glide from higher altitude to lower height.

Palmetto bugs are primarily attracted to food and water sources. They are attracted to starchy and sweet foods as well as fruits and vegetables. Additionally, they like unclean, wet, and moist environments to grow and lay eggs.

Where Do Palmetto Bugs Live?

Palmetto bugs are known to live and thrive in damp, wet, and moist environments. They are often found outside under plant leaves such as palms, under moist woodpiles, and shrubs. When the weather outdoors is cold, palmetto bugs can infest houses.

Palmetto bugs will seek warmth and humidity inside homes, as well as food and water sources. They’re most frequent in kitchens, tub drains, behind dishwashers and refrigerators, and garbage cans.

Additionally, they can also get into drains, sinks, bathtubs, and floor drains, as well as toilets, by crawling through sewer pipes. They are small enough to go into and out of drains and pipelines.

What Do Palmetto Bugs Eat?

Palmetto bugs will eat practically anything they can get their hands on. These animals consume both fruits and vegetables, as well as meat. They can have many food sources that is why they are abundant almost everywhere.

Food scraps, as well as dirty garments and fabrics, paper, and glue are all edible to them. Additionally, palmetto bugs also like food with a strong smell. They enjoy rotting fruits and vegetables, sweets like sugar and candies, and starchy foods.

Additionally, palmetto bugs are eaten by geckos and lizards. They are also preyed upon by birds, snakes, frogs, and opossums.

How Do Palmetto Bugs Get In Your House?

Palmetto bugs can get into your home through open doors and windows. They are most commonly infiltrate homes through cracks and gaps in house structures.

Moreover, they can get into drains and pipelines, pass through and emerge on sinks, toilets, and floor drains.

Does Having Palmetto Bugs Mean Your House Is Dirty?

If there are palmetto bugs inside the house, it does not mean the house is dirty. Food and damp locations in the house with water leaks may attract palmetto bugs. In addition, compared to the weather outside, the house may be warm and humid enough for them to seek shelter.

Even if the house is clean, palmetto bugs can be found inside your house if they have access to food and water. However, cleaning and sterilizing the house can help prevent pest infestations, including palmetto bug infestations.

How Long Can a Palmetto Bug Live In a House?

Palmetto bugs are resilient insects that can survive for up to three months without food. However, they can only survive for one month without water.

If they notice that they don’t have a constant source of food and water within the house, they are likely to go to a new place where they can have food and water.

Because palmetto bugs are frequently found in unclean and unsanitary environments, feasting on garbage and food waste, they are more likely to contract and spread diseases that can be dangerous to humans if infected.

Digestion problems such as Salmonella bacteria or food poisoning are common illnesses caused by palmetto bugs. Vomiting, stomach cramps, and diarrhea are some of the symptoms.

Some people are allergic to cockroaches, which results in a lot of sneezing and skin rashes. Palmetto bugs can potentially carry severe diseases such as typhoid fever and cholera.

How to Get Rid of Palmetto Bugs for Good?

Palmetto bugs can be eliminated using insecticides . You can also use baits  and traps . On the other hand, there are also natural ways to get rid of them that will not harm you, your family, or your pets.

However, attacking them in the close range may be difficult and frightening, especially if they attempt to fly. 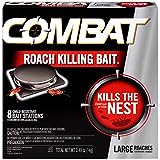 How to Get Rid of Palmetto Bugs Naturally?

To get rid of them naturally, you can do the following:

Related: How to Get Rid of American Cockroaches? | Information and Facts

Palmetto bugs are mostly found outside, in damp environments. However, they can be frequent inside houses, looking for food and water and a warmer and more humid habitat, especially when the outside temperature is colder.

There are a variety of methods for getting rid of palmetto bugs, including the use of insecticides and essential oils. Using borax and homemade sprays can also help kill palmetto bugs. Cleaning and sanitizing the house can help keep not only palmetto bugs but also other pests away.