The fake black widow is one of the safest cobweb weavers to see among the more than 230 species found in North America since its bite is not harmful. If you’re enthusiastic about finding one, it is helpful to understand how to recognize them.

How to identify and control false black widow? False black widows have a similar appearance to the black widow spider but are usually brown or dark purple. Their habitats are dark areas such as below beds and within cupboards. While it is safe to coexist with these spiders, pest control is straightforward if you have essential oils on hand.

This article will detail the false black widow habitat and activities. We’ll explain the spider’s size, speed, and leap to help you escape the unpleasant bite and save you time while looking for one.

Numerous spiders of the genus Steatoda are misidentified as black widow spiders. They have the title of false black widow. To prevent confusing this species with black widow spiders or vice versa, the following sections will provide all of the necessary information for identifying both.

What Is a False Black Widow Spider?

Certain false black widow species are visible throughout the year, both inside and outdoors, in various environments, including cactus, roadside cuttings, and ruined structures.

These spiders weave disorganized webs with many trip lines to ensnare passing insects. And they often hang upside down to wait for prey.

Additionally, you may observe white, beige, or orange marks on their skin.

Typically, these marks take the form of a crescent or triangle. The triangular patterns sometimes cause this species to be confused with the black widow spider.

When the baby false black widow emerges from the egg, it has a dark color identical to the mom.

The females are bigger than males, reaching a maximum length of 15 mm. (0.56 in.). Males, on the other hand, grow to 10 mm. (0.39 in.). Males have a more slender and elongated body than females, but the color pattern is similar.

If you’re still unsure how to identify a false widow spider, you should know that these arachnids do not jump. While some spiders leap to grab prey out of reach, fake black widows construct their web and wait for their victims to fall into it.

And they won’t jump at you when afraid. Instead, false widows will seek cover away from you to avoid being squished.

The typical false black widow lifespan is around 18 months. The females can live for as long as 6 years in ideal conditions. But the average lifespan for the male is about 1 ½ years because males often die shortly after mating.

Therefore, if you notice any of these spiders in your house, you must release them soon since they can survive for an extended period in cabinets and other dark spots.

In the battle of false black widow vs. black widow, there are many dissimilarities in their appearance and behavior. Additionally, significant distinctions exist between the sexes.

The female black widow is all black except for a crimson hourglass pattern on the underside of her belly. False widows, on the other hand, are often somewhat purple.

Some widow specimens have a faint brown hue, but these are generally females who have been overfed to the point that the abdomen has warped in color. The false black widow never exhibits this level of red pigmentation.

While it is very straightforward to recognize an adult female black widow, the young bear little resemblance to the mother. This trait stands in stark contrast to the false black widow life cycle.

Male widow spiders are somewhat smaller than females. They also have red and white patterns on the rear of their abdomens. This coloration is absent in young male false widows.

Male and female widow spiders both bites, but mature females bite the most viciously. A physician may provide antivenom, but it must be delivered as quickly as possible. In comparison, only female false widow spiders bite.

If you observe a spider but are unclear of its kind, call your local pest control for assistance.

False black widow bites can occur as the result of an unintentional encounter with a spider. False widow spiders are not hostile and will not attack humans randomly.

According to the University of California Agriculture Program, a false black widow bite can cause an initial burning sensation followed by slight irritation at the envenomation site.

When black widow antivenom is applied, it can potentially neutralize the venom’s effects.

But at-home therapy is relatively straightforward. To begin the false widow bite treatment, wash the area well with soap and water. Following that, use an ice pack to alleviate pain and itchiness on the spot.

Typically, the bite’s symptoms will subside within one to three days.

It’s worth noting that the false widow spider bites cause bacterial illnesses that are sometimes resistant to medications. Therefore, if you have been bitten and need emergency medical attention, your best course of action is to see a specialist.

Related: Can Spiders Bite Through Leggings?

What Does a False Black Widow Spider Bite Look Like?

Bites from a false widow frequently develop blisters and are occasionally pus-filled. Generally, there will be redness and slight swelling in the area.

Additionally, moderate to severe discomfort that worsens throughout the first hour, a headache, and tiredness may occur. Other false black widow bite symptoms include:

All symptoms vary in duration from person to person but do not exceed 60 hours.

False black widows carry venom that can immobilize their food, but it is almost harmless to humans. It may cause a general feeling of nausea, but this will dissipate after a few days.

If you’ve been bitten in the mouth or eyes or have severe swelling, you may have a wound infection.

And if any of the following occur after your spider bite, emergency medical care is required since they are symptoms of a severe allergic reaction:

How Do You Get Rid of False Black Widow Spiders?

You can get rid of false black widow spiders by vacuuming thoroughly to eliminate the webs and spiders from your home. There is also the option of collecting the spiders in a container, sealing them with paper then releasing them outdoors.

If this is not practicable, you may achieve bug control by removing prey. For this task, you may use insecticidal sprays in this case.

You should also use a caulking gun on cracks to prevent spiders from entering your house in the long run. Installing door sweeps and screens would also be beneficial.

Related: How To Get Rid of Spider Eggs?

The majority of products that include the following substances are quite effective at repelling false widow spiders:

However, some people prefer a more natural approach to pest control. If this describes you, you may safely eliminate spiders by utilizing Mdxconcepts Organic Pest Control Spray from Amazon.

This organic repellant is suitable for families with children and pets. Due to the absence of chemicals, there is no risk of accidentally poisoning your domestic animals or endangering the health of your family members.

The oil mix has peppermint, rosemary, and spearmint, which together generate an odor that is ideal for deterring fake widows from your property.

Another all-natural choice is Earthkind’s Stay Away Spiders plant-based repellent, which is also from Amazon. It is a bag with a blend of essential oils. 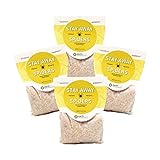 Earthkind Repellent Pest Control Scent Pouches - All Natural, No Mess, and Environmentally Safe - 1 Pack - Not for Sale in NM, SD Stay Away Spiders, 2.5 Ounce (Pack of 1)
Buy on Amazon

You may distribute the pouches around your house in areas previously infested by pests to dissuade spiders and prevent their return. The solution is effective and repels spiders for an entire month.

How To Keep False Black Widow Spiders Away?

To keep false black widow spiders away, spread robust fragrances around your house. They dislike pungent smells of:

By doing this, you may significantly boost your odds of warding off this species.

You can make an at-home repellent by mixing one of the essential oils listed above with water to form a spray. It helps to use more oil than usual since a more pungent odor correlates to a more effective bug deterrent.

Afterward, apply this to windows, corners, and cupboards. However, it is prudent to verify that the essential oils are suitable for use on furniture.

Related: How To Use Vinegar To Get Rid of Spiders?

False black widow spiders are neither aggressive nor lethal. They prefer to catch other spiders, including true black widows.

A false black widow bite might elicit an initial burning sensation, followed by minor discomfort. But the symptoms of the bite will go away in about three days.

If you have been bitten and need immediate medical assistance, you should see a professional.

Our Water Our World Organization. (2016). Spiders The Helpful Hunters. University of California.