Argentine ants are a species of ants native to South America. However, human activity has transported them to almost every continent in the world, and they are now well-known for infesting homes and other buildings in their search for food and water. If you find Argentine ants in your home, don’t panic. There are a number of things you can do to ensure these pests stay outside where they belong.

How to get rid of Argentine ants? When it comes to getting rid of the Argentine ants, the most important thing is to act fast. These ants are famous for their reproduction rate as they can have multiple queens per colony. The best course of action is to first remove any food or water sources in your home. After limiting their food sources, it is best to apply ant baits in order to get rid of them. Using sprays or other forms of pesticides will only scatter Argentine ants and create more separate nests.

These ants are not to be underestimated, as they are attracted to waste and decaying matter, Argentine ants can spread dangerous bacteria over your food and cause serious health problems. In the later sections of the article, we provided you a more detailed step by step guide on how to get rid of them.

How to know if you are dealing with Argentine ants or another ant species?  What other important information should you know if you have an ant infestation?  We have answered all of this information and more in the following sections.

If you just want to use or step by step instructions on how to get rid of these annoying ants click on the table of contents and select it. Still, we urge you to read other important information about these ants before applying any of our pest control steps. Let’s begin!

• What Are Argentine Ants?

Argentine ants are an invasive ant species native to several countries in South America.  They are known for their adaptability and very large colonies, which can now be found on several continents. They are average in size and appearance compared to other ant species and are light to dark brown in color.

• Where Do Argentine Ants Live?

Today, Argentine ants can be found in Australia, Europe, Africa, North America, Hawaii, and New Zealand. They prefer warm, wet climates. If they reach the inside of your home, they will be attracted to moist areas such as sinks, house plants, and leaky pipes.

• How Long Do Argentine Ants Live?

Argentine ant eggs hatch after about 28 days. After hatching, it takes approximately 75 days for the larvae to reach full maturity. Queens of argentine ants only need to mate one time in order to continue laying eggs for the rest of their lifespan.

• What Do Argentine Ants Eat?

How to Get Rid of Argentine Ants – Step by Step Instructions

So, how to get rid of Argentine ants? Follow these steps to remove the Argentine ants from your home and to prevent them from coming back.

Step 1 – Identify the Root of the Problem

If you are dealing with an Argentine ant infestation, you can be certain that they’ve found a source of food and/or water in your home. First, check all of the food stored in your house.  This includes opened packages as well as sealed food that may have damaged packaging.

After you’re sure that the food in your home is sealed up and secure, check for any sources of water. Something as simple as a leaky pipe or water in the base of a potted plant could be enough to attract Argentine ants to your home.

Leftover crumbs or sticky remnants of spilled juice will be enough to catch the attention of Argentine ants. Leftover food in trash cans is also a source of food for these insects. Use a 50% water, 50% vinegar solution to wipe down all surfaces in your home, including floors and trash cans. The water and vinegar solution will erase the argentine ant’s chemical trails (called pheromone trails) which they use to lead other ants to sources of food.

Note: Some surfaces, such as stone and hardwood floors, should not be cleaned with vinegar. In this case, use a specialized cleaner made for that surface.

When it comes to battling an Argentine ant infestation, ant baits are the most effective method available. Ant baits contain an ingredient that is mostly harmless to humans but deadly to ants. The ants will carry the pieces of bait back to their nest, believing it to be the food for the colony. The bait is then shared with the rest of the colony and when ants and their queens consume the bait it will eventually destroy the whole colony.

Here are some of the best products available to take care of your argentine ant infestation.

Terro Liquid Ant Baits have been on the market for years and are well-known for their effectiveness and convenience. They even make a “multi-surface” version which includes adhesive strips, allowing the ant baits to be placed under tables or countertops.

These are the other ant baits that we also recommend for getting rid of the Argentine ants: 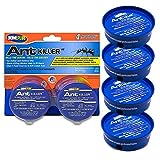 You can make your own ant bait using boric acid. This fine powder boric acid can be easily mixed with jelly, honey, or peanut butter. Use one teaspoon of boric acid per one cup of food. Place the mixture in a container with holes and place it where you found Argentine ants in your home. For safety reasons, make sure that the container is clearly marked as an ant bait.

These homemade ant baits work in the same way as the bait you buy at the store, ants will bring the food, along with the poisonous boric acid, back to their nests to share with the colony. Eventually, the entire colony will be killed.

How to Get Rid of Argentine Ants Naturally

If you prefer to go a more natural route, there are plenty of alternative ways to deal with an ant infestation. Here are a few things you can try:

Mix one-part dish soap with three-parts water. Use a spray bottle to spray the solution directly on the Argentine ants. The mixture will cling to the ants’ exoskeletons, causing suffocation.

Baby powder and chalk are known to deter ants. It is unclear why, but ants will do just about anything to avoid these products. Sprinkle the baby powder around entry areas of your home or draw chalk lines on hard surfaces that you don’t want ants to cross.

Diatomaceous earth is an all-natural product made from the fossils of sea algae and other tiny sea organisms. It kills ants by coming into contact with their exoskeletons and drying them out. Diatomaceous earth can be found at most home improvement and gardening stores.

While the argentine ant’s bite is not poisonous or dangerous on its own, their bite could lead to complications like infection or anaphylactic shock. To prevent infection, wash the area thoroughly with soap and water, and use a spray disinfectant if possible.

Keep the area clean during the healing process, and avoid scratching. Scratching creates tears in the skin and transfers harmful bacteria from your fingers into the wound, leading to infection.

If you believe your ant bite is infected, see your doctor. It’s also important to be aware of the signs of anaphylactic shock. Anaphylactic shock is a rare but serious condition that can be triggered by insect bites. Signs include swelling of the tongue, lips, or throat, tingling hands or feet, and difficulty breathing. If you observe any of these symptoms, seek immediate medical attention.

Argentine ants may look similar to other ant species, but there are a number of interesting things that make them stand out from the others.

Argentine ant queens are unique in a number of ways. Argentine ant colonies contain the highest queen to worker ratio of all ant species. The queens are also mobile, allowing them to do more than just lay eggs.

They are known to feed their own young. In other ant species, this task is left exclusively to worker ants. Having such mobile queens allows the argentine ants the ability to move their entire colonies very quickly when threatened.

Argentine ants are responsible for building the largest ant colony ever discovered by man. In the year 2000, a colony was discovered in southern Europe that stretched for 3,700 miles.

When Argentine ants are crushed, they let off a musty smell. Only one other species of ant, the odorous house ant, lets off a similar smell when crushed.

Although argentine ants make up some of the biggest colonies in the world, they are not as aggressive as other ant species. Most ant colonies, even those belonging to the same species will go to war with each other over territory. However, this is extremely rare for argentine ants. When they encounter another Argentine ant colony, it is common for them to simply integrate the foreign colony into their own.

Argentine ants are fascinating creatures, but they don’t belong in your home! If you have an ant infestation, act quickly, and stay diligent. With the right tools and our information, you’ll have the problem solved in no time.

If you think that you can’t handle your ant infestation please consider calling professional ant exterminators as they will solve your problem within a day or two. For more pest-related content please keep following our site!

Giraud, T., Pedersen, J. S., & Keller, L. (2002), Evolution of supercolonies: the Argentine ants of southern Europe, Proceedings of the National Academy of Sciences of the United States of America

The Invasion of the Argentine Ants, University of California, Santa Barbara