When you look at moles, they may look harmless and cute. However, never let their adorable facade fool you since they are very capable of causing severe damage to yards and landscapes.

What are the mole signs in your yard? Moles leave signs in areas where they are most active. Some of these indications include elevated mounds of dirt, dead grass or discolored areas of your lawn, extremely loose soil, and raised bumps. You may also notice a lot more weeds than grasses since moles take out the roots of grasses when burrowing, allowing grasses to thrive.

By reading this guide, you will know the reasons behind the moles in your yard, their characteristics, and natural ways to get rid of them. So, let’s get started!

Is It Destructive to Have Moles in Your Yard?

Having moles in your yard is detrimental since they usually burrow holes in the surfaces of your lawn, harming the roots of the grasses. As a result, your yard will have brown patches or even uproot the upper layer of the soil, which can cause severe damage to plants.

In addition, they can also pose health concerns. For instance, moles can bite when provoked, which can cause redness and swelling.

There are also rare cases where they transmit rabies to their victim. Moreover, these burrowing pests can also spread parasites (e.g., mites, ticks, fleas, lice, etc.), harming pets and humans.

Why Do I Abruptly Have Moles in My Yard?

Like most invasive animals, moles can appear in your yard since there are specific things that attract them to your area. They may find your place an ideal habitat for burrowing, breeding, and feeding.

Moles typically stay in areas where there are a lot of insects and damp, nippy soil. So, if your home surrounding is like this, there’s a high chance that you will attract moles in your yard.

Signs of Moles in Your Yard

The tell-all signs to determine if you have moles in your yard are:

Several Molehills in the Yard

Moles love to excavate tunnels beneath the soil’s surface to look for insects, grubs, and worms to eat. This excavation results in several molehills—a sign of their presence in your yard.

Clumps of Dirt on Lawn

Another undeniable sign of moles in your yard is seeing clumps of dirt. These dirt chunks are the result of the burrowing process of moles while looking for grubs and worms to eat.

Seeing dead grass beside molehills is a sure-fire indication that you have moles in your yard. This is the result when these burrowing mammals unintentionally disrupt the grasses’ root systems, killing the roots at the surface level.

What Is Poisonous to Moles?

There are a few chemicals present in commercial products that are poisonous to moles, such as:

These worm-shaped baits are particularly made to act as natural earthworms that can be found in any soil. This means that moles won’t even suspect the traps laid right into their faces.

Just drop some of Talpirid Mole Worms’ content into the tunnels where the mole activities are ongoing and wait for at least five days for the result. You will know that the baits have worked if you find there are no new molehills created on your lawn.

However, like most products, it comes with its pros and cons.

This is a dry bait granules product, which can help eliminate moles in your property. Molemax also works for other burrowing pests, such as voles and gophers. 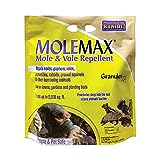 Just put at least 1 to 2 teaspoons of Molemax granules at the entrance of the tunnels, seal it and wait for several days to see the result.

Since moles are known to feast on worms, the Tomcat Mole Killer is one of your great options to get rid of moles in your yard. The product itself was developed to look like a worm, tricking moles into thinking it’s their biased food.

However, that’s not the case. The worm-like product contains a poison, killing moles after ingestion.

After consuming the synthetic worm, they will die and decompose below the ground.

What Is the Fastest Way to Get Rid of Moles in Your Yard?

There are several ways to get rid of moles in your yard fast, and that includes the following methods:

One of the reasons you have moles in your yard is the food they can get from there. These animals are fond of eating grubs, earthworms, and crickets, so if you remove these elements from your yard, moles will not spare time to ransack your lawn repeatedly.

Using a mole trap  is one of the most efficient and fastest ways to eliminate moles in your yard. However, this can be a cruel way to deal with the issue.

This involves trapping and killing moles both above and beneath the ground. The instructions should also be followed carefully to ensure the efficiency of usage.

So, when you buy the trap online or in your local store, read the label carefully for the best result.

As mentioned earlier, moles eat worms and grubs as part of their diet, and you can use this to your advantage by using mole baits. These baits are in the worm-like form to lure moles into ingesting them.

Once ingested, this will kill the moles, but more humanely than a mole trap.

How to Keep Moles Away Naturally?

To get rid of moles naturally, consider doing the following:

Make Your Surrounding Undesirable to Moles

One of the reasons moles make their way to your home is that they find your environment desirable to forage, live and grow. Your yard may have many grubs, worms, and other food elements that moles love to consume.

After that, shake well the mixed solution and spray it on the areas where moles keep on visiting.

Use Plant or Flowers as Barriers

Another way to keep moles away naturally is by making plant or flower barriers. This means using plants that are deterrent to moles, such as daffodils, marigolds, lavender, chives, etc.

Just plant any of these flowers on your property, and their scent will make moles run away.

Another cost-effective method to use to keep moles away naturally is by using household products, such as:

Just sprinkle a generous amount of any powder mentioned above, and moles will try their best not to step into your yard. Reapply as needed.

Do Coffee Grounds Keep Moles Away?

Coffee grounds can keep moles away by simply sprinkling them into your yard and the mole holes. After that, close the holes using soil; the coffee scent will irritate the burrowing pests and make them think twice about returning.

What Is the Best Mole Killer?

One of the best mole killers available in the market today is the Victor Easy-to-Set Deadset Mole Trap . It effectively kills the moles within their burrowed tunnels by inserting the item into the ground.

The item is sensitive to movement, so if the mole moves below the ground, it will get caught in the sharp nail-like feature of the trap. This will end up killing the mole inside the tunnel instantaneously.

The item is good to use in any type of soil, and it’s already assembled, so it’s ready to use. For the direction of use, always refer to the product’s label.

Do Moth Balls Keep Moles Away?

Mothballs are better in repelling moths but don’t essentially help with the mole problems. It’s also best not to consider using this against moles since it’s toxic and it’s not as effective.

In addition, using mothballs to manage mole problems is illegal. Mothballs can only be used per the specification found on the product label.

How Do Golf Courses Get Rid of Moles?

Golf courses get rid of moles through various methods, such as gassing and trapping.

In this method, gas bombs  are required to get rid of moles. These bombs contain poison that effectively kills moles underground.

The bombs are set at the entrance of the mole’s tunnels and will release toxic gasses that will eventually kill the moles.

Trapping is another method golf courses use to stop moles from burrowing into their grand golf courses. This involves using a harpoon to catch the mole burrowing under the ground.

How Many Moles Live Together?

Moles prefer to live alone except when it’s time to breed due to their antisocial traits. Only three to five moles live within that span of area, but the more common number is usually two to three.

What Time of Day Are Moles Active?

Moles are active during the early morning and evening. So, if you want to catch these burrowing animals, it’s best to adhere to these times.

Although moles seem harmless at first look, they can create serious damage to your lawn through their burrowing activities. So, to prevent that, consider using the given guide above to solve the issue or call in a pest control professional to do the job for you.

If I see mole runs, can I tell how many moles I have? (2019) USDA National Institute of Food and Agriculture.