Rodents are common household pests present in areas all over the world. Knowing how to differentiate between certain rodents and understanding how to eradicate them will help your home rodent-free.

How to control rodents? Control methods such as traps, rodenticides, and repellents are very effective when used properly. Rats and mice are destructive pests that multiply quickly and are difficult to eliminate. Monitor your home for re-entry signs to prevent them from returning.

To learn more about rodent pest control and prevent rodents like mice and rats from causing damage, keep reading. This guide will cover how to identify rodents, assess rodent infestations, and remove them from your home or property.

Rodents are a group of gnawing mammals characterized by their lack of canine teeth and perpetually growing incisors. This group contains mice, rats, hamsters, gerbils, squirrels, chipmunks, porcupines, and their ancestors. Around 40% of all known species of mammals belong to the order Rodentia.

What makes rodents so difficult to eradicate is that they must regularly file down their teeth by gnawing on any materials they can find. This makes them very destructive in large groups, as they damage structures, spread disease, and contaminate food and water sources.

The order Rodentia is an extremely diverse group of animals. It contains the following species:

Rodents widely vary in size, appearance, diet, and behavior, but they all have incisors that must be worn down through gnawing.

Mice and rats are among the most common rodent pests, and they also tend to be the most destructive in groups. A good rule of thumb is if you can see one rat or mouse, you likely have at least 20 more hiding within your home or other structure.

How to Know if You Have Rats or Mice: Identification Guide

If you are dealing with a rat or mouse infestation, you will be able to notice evidence of rats or mice around your home or building, even if you never actually see one. Be on the lookout for the following signs:

Another clear sign of infestation, of course, is the visible presence of individual rats or mice. Although rodents tend to avoid high-traffic areas, they are occasionally visible when running from place to place.

As we touched on earlier, if you spot one rat or mouse in your home, you almost definitely have dozens more hiding away within your walls, floors, and cabinets.

Are Rats Worse Than Mice?

Rats are larger and significantly more aggressive than mice, making them generally more difficult pests to contend with. Because of their larger, sharper incisor teeth, rats may potentially do more harm and transmit illness through their painful bite.

Additionally, rats have a more foul and pronounced odor than mice, giving off a musky or even rotting smell in large groups. This is worsened by the fact that they produce larger, more frequent droppings than mice.

However, due to rats’ much larger size, it is somewhat easier to block off their entry points. Still, most common brown and black rats are perfectly able to squeeze through holes as small as a quarter in diameter. Mice, by comparison, can fit into openings as small as a dime in diameter, making it more difficult to close off entry points.

Both species are highly destructive and should be eradicated as soon as an infestation is determined to prevent further damage to gardens, buildings, and other structures. Rats and mice also both carry disease and can aggravate allergy sufferers’ symptoms in large groups.

How Fast Do Mice and Rats Multiply?

Rats and mice both reach sexual maturity at a very young age (around nine weeks for rats and about six weeks for mice) and produce multiple litters per year. On average, a house mouse can produce up to 10 liters in her lifetime, consisting of around six babies per liter.

Mice usually only live around one to two years in the wild, which slightly hinders their ability to reproduce in large numbers, but 60 babies to one mouse is still substantial.

Rats give birth to around six litters per year, with each litter consisting of 5 to 12 babies. Although not all offspring will grow to reproduce, a rat population can grow from two individuals to over 1,000 within a single year. Notably, rats can live several years, so even a single breeding pair can produce dozens to hundreds of offspring in their lifetime.

Once a rodent infestation is established, it can be extremely difficult to remove all individuals. Prevention is the best means of controlling rat and mouse infestations.

Since rats and mice breed so quickly and in such a prolific manner, only one breeding pair is necessary to continue producing dozens of offspring, which, in turn, rapidly reach sexual maturity and produce dozens more rats or mice.

Still, even the most difficult infestations may be removed with effort and care, as well as repeated use of rodent control methods such as traps and rodenticides.

How Long Does It Take To Remove Rodents?

While small numbers of rats or mice can be eliminated within one to three weeks, larger populations can take several months or more to get rid of completely.

How long it takes to completely eradicate a rodent population depends almost entirely on the size of the infestation and how long it has been allowed to proliferate.

There are many effective methods of controlling and eliminating rodent populations. The primary two means of rodent removal are traps, such as electrocution and glue traps, and rodenticide poison baits, which are usually either anticoagulants or other acute toxicants.

When it comes to prevention, sealing off entry points, setting up additional traps, removing clutter, and removing food and water sources will prevent rodent populations from re-establishing themselves after eliminating them.

For rats and mice specifically, the best removal methods are traps and rodenticides of varying builds, styles, and ingredients. Combining these methods and using them throughout an infested structure is the best way to ensure thorough and complete removal.

For prevention, repellents such as oils, light and sound emitters, and spray repellents are all very effective.

Related: What Is the Best Way to Exterminate Rats and Mice? | Tips and Guide

There are several kinds of traps meant to capture rats and mice and either kill them or immobilize them for safe relocation or humane killing. The most effective and common types include electrocution traps, snap traps, glue traps, and live traps.

Traps that use an electric shock to deliver swift, fatal electrocution are now considered the most humane means of eliminating rat and mice populations. These traps usually consist of a baited tunnel set with a metal plate. When it senses a certain amount of weight, it emits a charge of several thousand volts to kill the rodent trapped inside instantly. 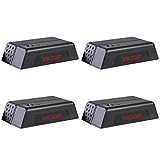 Although glue traps are effective, they are generally considered inhumane means of killing pests like rats and mice. In addition, these traps are simple and somewhat crude, as they are typically no more than a board covered with very sticky glue on one side.

These traps are designed to be placed in high-traffic areas and baited to attract mice and rats. When the rodents walk on top of the glue-covered board, they become stuck and will either starve to death or die from dehydration unless removed.

These traps are designed to capture a rodent such as a rat or a mouse without killing them. They typically consist of a metal cage with a spring-loaded door that snaps shut and traps the animal when they enter it. For best results, it is recommended to bait the trap to attract the rodents.

These traps are the most humane by far, but the rat or mouse will usually need to be killed anyway to prevent re-infestation.

Rodenticides are the other primary means of eradicating rat and mouse populations. It is usually poisoned pellets, blocks, or chunks. Moreover, it should be placed in hard-to-reach areas accessible to mice and rats but not pets or children, as the poisons are highly effective and lethal even to larger animals and humans.

The main two types of rodenticides are anticoagulants, which cause internal bleeding, and acute toxicants, which deliver a fast-acting poison. 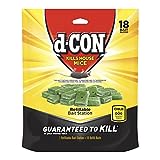 These rodenticides prevent blood from clotting, which causes the animal that ingests them to bleed internally for several days before eventually perishing. Many different kinds of active ingredients are used in these rodenticides, including warfarin, chlorophacinone, and bromadiolone.

Acute Toxicants contain fast-acting poisons to kill a rat or mouse within one to two days. The active ingredients in these rodenticides vary, but bromethalin and zinc phosphide are the most common.

In this section, we’ll cover the most effective and best-reviewed products from Amazon that are used for rodent control in several of the above categories.

1. For electronic rodent killers, products such as the Victor M250S Electronic Mouse Trap  are ideal and easy to use. After adding bait to the trap, all that remains is to wait for the indicator light to turn on, signaling a rodent has been captured and swiftly electrocuted.

2. Although live traps are controversial, the Lulu Home live cage trap  is an effective option for capturing rodents safely and humanely as possible. 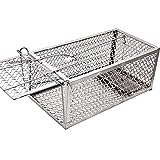 3. As far as rodenticides go, the d-CON refillable bait stations  are highly recommended. It is effective for eliminating large populations of rats, mice, and other rodents.

Repellents are another great way to prevent further infestations from occurring by keeping rats and mice away from your home or business.

The main two types of repellents used for mice and rats include spray repellents such as the Bobbex Animal Repellent Spray  and electronic repellents that emit high-frequency sounds and lights like the Loraffe Plug-In Rodent Repellent  from Amazon.

By either giving off unpleasant sounds, scents, or flashing lights, these products deter mice and rats from entering and destroying structures and breeding within them.

These repellents are very popular as they are the most humane means of preventing rodent infestations. However, their effectiveness can vary depending on whether or not an infestation has already been established.

When hiring a rodent exterminator, the price will vary depending on their experience and the severity of your infestation. However, you can generally expect to pay anywhere from $200 to as much as $1,000 or more for their services.

Controlling a rodent infestation is a complex process that involves several steps and multiple methods to be as effective as possible. When eliminating a rat or mouse population, it is best to use both traps and rodenticides to eradicate as many rodents as possible, as a single breeding pair can produce dozens of offspring within months.

After an infestation has been removed, it is a good idea to employ preventative measures like repellent sprays and electronic repellents to keep rats and mice from re-entering. In severe cases, the help of an exterminator may be necessary.

Rodent Control After a Disaster. (2012). Centers for Disease Control and Prevention.