Birds have a peculiar habit of nesting on the roof, causing some damage to your home, other structures, and even plants in your garden.

But, how do you prevent birds from nesting on roof? You can make repellents using a mixture of crushed red chili peppers into the mix of water and vinegar. Then, boil the mixture, infuse or let it cool down and put it in a spray bottle. Finally, spatter it into the areas where the birds are causing problems.

Furthermore, you can also use bird’s spikes and shiny objects like CDs to deter the birds from nesting from your place. The reflective CDs discourage the birds from returning to your area.

In this article, we’ll look at why birds might build nests on your roof and how to get rid of them.

What Birds Nest in Roofs?

Different birds can build nests on your roofs. Among them are the following:

Why Do Birds Nest Under Roofs?

Birds’ natural habitats have reduced over time. This is why they’ve been forced to nest on roofs over the years to have their young.

If you’ve found a nest in your home, it’s best to know that you shouldn’t damage or destroy it. All birds are preserved under state or federal law except for house sparrows, pigeons, and European starlings. Harming the birds even indirectly by using chemicals will hold you legally liable.

What to Do if Birds Nest on Your Roof?

If you have a bird’s nest on your roof, consider to do the following before making any attempt to remove it:

Make Sure the Nest Is Inactive

Since there’s a law protecting birds, you have to ensure that the nest on your roof is already inactive. This way, you won’t be going against the law by removing an active nest of migratory birds.

So, it’s best to check your area occasionally for an ongoing nest construction to prevent it ahead of time. If the nest has already been constructed, your only option is to wait until the nesting season is over.

Check for eggs if you see a nest on your roof. If you don’t see the parents, this doesn’t mean that the egg is abandoned. It could be that the eggs are purposely left in the nest to feed or to help the eggs cool down.

Wait Until the Nesting Season Is Over

If birds already nested on your roof, wait until the nesting season is over before attempting to remove the nest. Most birds nest only once a year; however, certain species nest for four to five years.

Songbirds, for example, will be ready to leave the nest after two to three weeks, so you can then remove the nest from your roof. However, if you’re not familiar with bird species and their nesting periods, it’s best to leave this job to professionals.

Is It Bad if Birds Nest on Your Roof?

It isn’t good that birds nest on your roof since they can cause severe moisture damage. If they choose to nest in your roof vents, they can block the airflow from your attic. It allows the water vapor to build up until it condenses on attic surfaces, causing severe damage.

Do Birds Cause Roof Damage?

Can Birds’ Nests Be Removed?

If you’ve confirmed the bird’s species you have on your property, you can’t remove the nest as it is illegal. Removing the nest is only acceptable if there is no longer any bird activity on the nest.

How to Get Rid of Birds Nest on the Roof?

Before getting rid of a bird’s nest on your roof, ensure it’s inactive to avoid being legally held liable for removing the nest. Remember only to remove nests for the following reasons:

To get rid of an inactive nest, consider doing the following steps:

Step 1: Thoroughly check the nest for any surviving chicks or eggs and wait to ensure that all the birds are healthy and have been out for several days. Most young birds occasionally return for the food handout from their parents but will no longer visit after a few days. So, give it another week and observe before doing the nest removal.

Step 2: When handling the inactive nest, make sure to wear gloves to prevent contamination from mites or other parasites. Microscopic bugs might be in the nesting debris, which can potentially cause harm to your health.

Step 3: To avoid attracting predators, dispose of the abandoned nest in a compost pile or seal it in a plastic bag. The nesting material will naturally decompose by itself or could be reused by other nesting birds.

Step 4: After removing the abandoned nest, clean the area where the bird nested with a solution of 1 part chlorine to 9 parts water. Make sure to clean the gutter, nesting shelf, and hanging bracket. Let the solution dry, and don’t rinse.

How to Get Birds Out of Your Roof?

If you want to deter birds from nesting in the same place, you’ll have to take extra steps to prevent birds from rebuilding in your area. You might try the following tips:

What Home Remedy Keeps Birds Away?

One of the best home remedies to keep birds away is by using decoys . Birds have several natural predators like owls, cats, and snakes, and you can make decoys out of them.

The decoys could be made out of wood or other materials that can withstand the changing outdoor weather. You also have to change the objects once in a while to prevent the birds from getting used to them and eventually ignoring them.

You can deter birds from nesting or going back to your place by hanging shiny, reflective objects near the landing or nesting site, such as the following:

Another home remedy you can use is bird spikes . These spikes are long, needle-like rods used for bird control and made of tin or plastic cans and attached to the window sills and overhangs.

These objects can also be built by hammering nails into wood, making it discomforting to land on them. 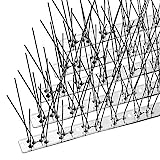 Hang Round Garden Balls in Your Garden

Another natural way to deter birds from nesting in your place is by hanging round garden balls in your garden, trees, or fence posts. The birds can confuse these orbs as eyes and try to evade them.

Using repellent sprays can prevent the birds from coming back and forth to your place regularly. To make the spray, you need to crush red or green chili peppers into the mixture of water and vinegar.

After making the mixture, put it in a clean spray bottle and spatter it into the area where birds usually stay.

Are Birds’ Nests Protected by the Law?

Birds and their nests are under the protection of the Migratory Bird Treaty Act (MBTA), so getting rid of their nest is illegal. You’ll also need a permit issued by the U.S. Fish and Wildlife Service (USFWS) to even keep a nest taken out from a tree.

There are many ways to prevent birds from nesting on your roof. You can make repellent sprays using crushed red chili peppers mixed into water and vinegar.

Additionally, you can also use bird spikes, hang shiny objects or place garden balls into your trees, fences, or garden. It’s also best to remember not to get rid of an active nest as the Migratory Bird Treaty Act law protects them.