If you’ve ever kept chickens, you might have encountered skunks too. Skunks and chickens certainly don’t get along, and when it comes down to a fight between them, a skunk will usually win. If you want to avoid dead chickens and a persistent rotten smell, you’ll want to deal with them as soon as they’re there.

How to keep skunks out of the chicken coop? Skunks getting in the chicken coop is a common problem but is simple to solve. Chase the skunks out with noise and light, and make sure they stay out by setting up a barrier underground. With tools like skunk repellents, sprays, and noisemakers, you can keep them out.

Skunks in the chicken house will inevitably become a problem for you if you plan to keep chickens for a long time. Read on to learn what to do when skunks start attacking your chickens.

When you learn that skunks can break into chicken coops, you might have a million questions. Do skunks kill chickens? Can a skunk eat a chicken? And what about their eggs? Will skunks eat chickens’ eggs?

There are plenty of reasons that a skunk might break into a chicken coop.

In fact, skunks don’t like the way their spray smells! Skunks only spray when they feel threatened, so they won’t do it unless they think a predator is nearby.

Their sharp sense of smell means that they smell food from a good distance. But are chickens a major part of their diet? What do skunks eat?

Skunks eat both meat and animal matter because they’re omnivores. They’re also opportunists, meaning they’ll eat whatever they can find. Some of their favorite foods are mice, voles, berries, birds, and eggs. Chickens also fall right into that category.

If a skunk gets a good whiff of a chicken, it will go for it when the coast is clear. They do like chicken meat, so if they think they can get it without much of a fight, they’ll go for it.

Skunks will certainly kill chickens. The animal’s sharp claws and teeth are perfect for attacking a flightless bird like the chicken, which only has its beak to defend itself. However, skunks generally avoid combat.

Unless a skunk has a distinct size advantage, it won’t go out of its way to kill prey. Most of the time, the real target is the chickens’ eggs.

If you have skunks in the coop, they will likely not kill more than one or two at a time. If you have several dead chickens, it’s more likely that you have a weasel or even a raccoon.

Why Do Skunks Eat Chicken Heads?

If you notice that your chickens’ heads are missing, that’s a very real clue that you have a skunk problem. Skunks tend to kill chickens by aiming for the head and throat first because skunks tend to avoid conflict.

Skunks can and will eat chicken bones without suffering any digestive issues. A wild skunk has a hardy digestive system, and raw bones are fairly soft and pliable compared to cooked bones.

You should also avoid leaving raw chicken bones in your trash if you live in an area with skunks. They will sniff them out and find them.

Skunks can eat chicken eggs, as they’re much easier to kill than chickens, after all. If a skunk eats the eggs in your chicken coop, one end of the egg will be open, and the sides will be slightly crushed.

A skunk is likely to eat your eggs, but they aren’t likely to carry them very far. Skunks’ bodies aren’t ideal for walking and holding an egg, so if a skunk eats your eggs, the evidence will likely be very close by. In other words, skunks can eat chicken eggs, but skunks don’t steal chicken eggs.

While the chicken wire is great for keeping your chickens in, it is not very good at keeping predators like skunks out.

Skunks can climb chicken wire, though they probably won’t climb anything unless they feel threatened. They’re much more likely to chew through chicken wire, with sharp teeth and claws that can take apart the relatively thin metal.

For more effective fencing that will keep skunks from chewing through, look into hardware cloth. Hardware cloth is made to be much more durable than chicken wire. If you’re worried about skunks crawling over the fence, consider giving the coop a roof.

Skunks probably can’t open the door to your chicken coop. If you have an enclosed chicken coop surrounded by chicken wire, skunks will have difficulty getting in. However, it’s possible that they can dig their way in and crawl in underneath if the coop is not raised above the ground.

How To Get a Skunk Out of a Chicken Coop?

If you’re particularly unlucky, you might find that a skunk is sleeping in your chicken coop. That will pose a huge problem to your chickens’ well-being.

To get a skunk out of a chicken coop, you can do the following:

How To Get Rid of Skunk Smell in Chicken Coop?

If a skunk sprays in your chicken coop, the good news is that the odor won’t bother your chickens at all. Chickens have a poor sense of smell, so they won’t be bothered.

There isn’t much you can do to get rid of the skunk smell in a chicken coop, however, except to wait for it to go away. There are some skunk deodorizers on the market, but they won’t make much of a dent on hard surfaces.

Depending on where you live and how well your coop is aerated, the smell could linger for just a few days or up to a month. Simply clean the coop like you usually would and wait for the smell to vanish.

How To Keep Skunks Away From Chicken Coop?

To keep skunks away from your chicken coop, your best bet is to put up a barrier that extends both above and underneath the ground. Skunks can dig their way into chicken coops, so you want to prepare for these possibilities.

To keep skunks from digging their way in, you can do the following:

Step 2: Hammer rebar that extends two feet (0.60 m) into the ground into the trench every three inches or so.

Step 3: Cover the tops of the rebar with dirt.

Use hardware cloth instead of chicken wire above ground since this is generally too sturdy for skunks to chew through. If you need a sturdy hardware cloth to surround your chicken coop, Amazon has YARDGARD Hardware Cloth that will keep any predator away from your chickens. 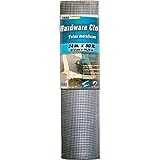 What Keeps Skunks Away From the Chicken Coop?

There are several things you can do to help keep skunks away if you want to make your chicken coop skunk-proof. You can scare them away with lights, keep them out with high-pitched noises, or even (believe it or not) stink them out of your yard!

If you want to place some defenses very close to your chicken coop, you’ll want to make sure you don’t use a spray, which could harm your chickens. Fortunately, there is something you can do to ensure the safety of your chickens.

Lights will frighten skunks away and can easily be turned on and off so that they don’t bother your chickens for too long. Skunks are unlikely to pick a fight if they sense danger, so using lights can be highly effective.

The Phosooy Solar Powered Predator Eye Animal Repeller from Amazon features two red bulbs per unit, mimicking the eyes of a predator. Simply turn them on at night, and they will flash at a high enough intensity to frighten skunks and anything else away. 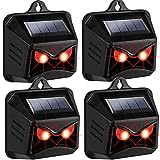 A noise machine is another way to clear skunks out of your coop. For one of the best skunk noise deterrents that will activate from a distance as far as 52 feet (15.84 m) away, the CLEANRTH Advanced Ultrasonic Animal Repeller from Amazon is motion-activated and won’t harm your chickens.

If you have a persistent skunk problem and need to take greater measures, you might want to invest in a skunk repellent spray.

This Natural Armor Animal & Rodent Repellent Spray is available on Amazon. It’s all-natural, so if you end up spraying it too close to your poultry, it won’t hurt them. Simply spray the area surrounding your coop, and the smell will be off-putting to skunks. 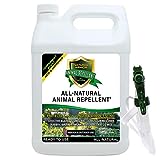 How To Make a Skunk-Proof Chicken Coop?

Here are the steps you need to take in order to make your chicken coop completely skunk-proof:

Step 1: Build a barrier that extends both above and below the ground.

Step 2: Use lights resembling a predator’s eyes to keep skunks out of the coop.

Step 4: If you have a particularly bad skunk problem, consider buying a natural spray repellent.

Skunks in the chicken coop is a frustrating problem but a preventable one. If you live in an area with many skunks, it’s important to make sure they can’t get to your chickens. Keeping your chickens safe from all of their natural predators will soon become second nature!

Living with wildlife: Skunks. Washington Department of Fish and Wildlife.

Erler, E., et al. (2019). What are the best ways to protect my chickens from predators? University of New Hamsphire.