If you have found what looks like a tick on your body, don’t worry yet. Some insects and spiders look similar to ticks, which can make identifying all of them challenging. However, if you know what to look for, you will be able to tell ticks from their many look-alikes.

Want to know more about what makes ticks different from other bugs? Continue reading this article as it will teach you how to positively identify ticks and all of the bugs that look similar to them so you can always know what kind of pest you are dealing with.

Ticks are tiny parasitic arachnids that feed on mammal blood. Since they belong to the arachnid family, ticks are more closely related to spiders than insects. They can feed on almost any type of mammal, including humans, dogs, cats, livestock, and wild animals.

Ticks have a hard, oval-shaped body and eight legs. Their bodies are very flat unless they have recently eaten. Ticks can come in many different colors, including red, brown, golden-brown, blue-gray, and black.

There are more than 20 species of ticks in the USA, and they all come in different colors and sizes, which can make it challenging to identify them positively. Still, all ticks have some characteristics in common, so if you know what to look for, you will always be able to tell these bloodsuckers from other pests.

Their heads, called “capitula”, are very small. On the capitulum, there are two pincer-like appendages with a straight, barbed one in the center. The barbed one, the hypostome, has a small tube called the “chelicerae”, located at the end part, which the tick uses to suck blood from its host.

When it comes to tick anatomy, there are two major types. Hard ticks have a hard plate on their backs called a “scutum,” which means “shield” in Latin word. Usually, the scutum is a dark, raised dot that is right beneath the tick’s mouthparts. Soft ticks, however, do not have a scutum.

Most ticks change their color slightly after they are engorged. That’s because their bodies stretch out, becoming thinner, and taking on the color of the blood they have eaten.

There are some insects that look like ticks, including:

Many insects commonly get confused with ticks, but there are a few key characteristics to look for in all of these insects if you want to determine whether it is a tick or not. All of these insects are different from ticks in various ways that you may not be able to see with just a glance.

The surest way to tell ticks from these insects is by determining how many legs your mystery bug has. Insects only have six legs. Ticks are not insects, and they have eight legs like spiders.

Ticks also only have narrow, stringy-looking legs. Other insects like fleas and lice have thick, broad back legs.

Are There Flying Ticks?

There are no flying ticks. They cannot jump or fly, so they use other methods to find their hosts. If you think you have found a tick but aren’t sure, you might want to check it for wings.

So, if ticks can’t fly, how do they find a host? Ticks have two different ways of finding their next blood meal.

Commonly, ticks will climb into trees and drop on any animal that passes by. Ticks also have a behavior called “questing,” where they hide in leaves and grass and raise their front legs, waiting for an animal to pass. Then, they climb onto their new host when it walks past.

So, if you think you may have a tick problem, you might want to ensure that you have positively identified your tick. Some of the most common bugs that look like ticks are mites and chiggers. Others include fleas, flea beetles, cabbage bugs, stink bugs, and carpet beetles.

Mites and chiggers are the most convincing since ticks, mites, and chiggers all have eight legs and are very small. They are all closely related and belong to the arachnid family.

However, mites and chiggers are much smaller than ticks, and they are usually a vibrant red color. They also have one set of legs very close to their mouthparts, while ticks’ legs are farther from their mouthparts.

Still, some other bugs commonly confuse people into thinking that they have found a tick.

Sometimes, you will be able to tell ticks from other bugs by their ability to jump. Jumping bugs like fleas and flea beetles look similar to ticks. However, ticks don’t jump. If your mystery bug can hop around, it’s not a tick.

Fleas are often confused with ticks since both of them are parasitic bloodsuckers. However, fleas are usually much smaller than ticks.

Moreover, fleas have very long back legs that allow them to jump, while ticks cannot jump at all. When you look at a tick from above, it looks round and flat, but fleas look thin and narrow from a birds-eye view.

Flea beetles are also often confused with ticks since they are similarly sized, have broad, round bodies, and come in a warm brown or black color that looks similar to many varieties of ticks.

However, flea beetles only eat plants, and they are harmless to animals and humans. They can also fly, which is another difference between them and ticks.

Still, both of these bugs have wings that fold over their backs. They have a triangular patch on the center of their backs too, where their wings do not cover their bodies.

Harlequin cabbage bugs and brown marmorated stink bugs are also vegetarians. They are some of the most common garden and crop pests, but they won’t bite you.

Unlike ticks, carpet beetles have six legs. They also have spherical, round shells that hide a pair of wings.

Carpet beetles don’t bite humans or animals. They eat natural fibers like wool, silk, cotton, and animal hair. Although they may not be parasitic like ticks, they are still unwelcome indoor pests.

Related: Do Carpet Beetles Get in Your Bed?

Crab spiders are commonly misidentified as ticks because their abdomens are flat, round, and small like a tick’s. However, crab spiders have two very long, jointed front legs, resembling a crab’s claws. Ticks’ legs, on the other hand, are all of the same lengths. Crab spiders also have eight eyes, while ticks only have two.

Weevil or Tick: What Is the Difference?

Poplar weevils are frequently confused with ticks since they have similar physical appearances. However, unlike ticks, poplar weevils have long snouts, six legs, and wings.

Weevils, and especially poplar weevils, are some of the most common insects confused with ticks. They look similar from a distance, but some key characteristics differentiate them from ticks and other insects.

Poplar weevils are beetles that feed on flour, grain, pasta, pet kibble, and other dried foods. They have round bodies, which is part of why they are often confused with ticks.

Still, poplar weevils have more spherical-shaped bodies, and they have a hard shell. The shell has vertical ribs or stripe-like impressions on it. Poplar weevils also have long, downturned snouts, which is part of what makes them unique and easy to identify.

Related: How To Get Rid of Rice Weevils?

How To Prevent and Protect Your Family From Ticks?

No one wants to have ticks crawling on their bodies. If you want to prevent ticks from getting on you, your pets, and your family, you might want to use some of these tips: 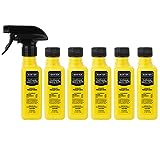 Related: How To Get Rid of Ticks in Yard?

When you think you have found a tick, it can be easy to get worried. However, many insects, spiders, and beetles look similar to ticks, which can cause a lot of confusion.

Knowing what makes ticks and all of their look-alikes different from each other is the key to understanding what kind of pests you are dealing with and whether they are harmful or not.

Tick Biology and Ecology. The University of Maine.