Stink bugs are among the invasive household bugs once the weather starts to get colder. Although they are considered agricultural pests, stink bugs can also enter your houses through tiny cracks and crevices.

These stubborn bugs don’t reproduce during winter, but you may still find a lot of baby stink bugs at home.

There are over 200 stink bug species in the US, but the most common one is the brown marmorated stink bug (BMSB). Scientifically known as Halyomorpha halys, BMSBs don’t transmit diseases to humans.

However, some stink bugs can be dangerous. This article will teach you about baby stink bugs and how to deal with them.

What Is a Stink Bug Nymph?

A stink bug nymph is an immature version of adult stink bugs. These nymphs come from stink bug eggs, which hatch within 5 days.

Baby stink bugs pass through five nymphal stages and will molt during every stage. These developing nymphs grow from 2.4 mm to 12 mm long and will change their body colors.

How Can You Identify Baby Stink Bugs?

At first glance, baby stink bugs look like ticks. Newly hatched stink bug nymphs have an orange-red abdomen, while their head and thorax are black. Second instar nymphs will have a black body.

As they continue growing into becoming adults, these nymphs will have brown bodies and well-developed wings.

Stink bug nymphs smell just like their adult counterparts. These nymphs will produce a foul odor once they feel threatened, hence the name.

Since stink bugs don’t bite or sting, releasing a stinky smell is their only defense mechanism against predators. Some people may have an allergic reaction to the smell of stinky bugs.

What Do Stink Bug Nymphs Eat?

Like their adult version, stinky bug larvae feed on a wide variety of fruits and plants. They use their piercing mouthparts to suck from blossoms, fruits, and leaves.

The brown marmorated stink bug is known for being an important pest of 100 different kinds of crops, including apple, field corn, pepper, and tomato.

On the other hand, nymphs of rough stink bugs (Brochymena arborea) are not pests but rather beneficial insects. Like their adults, they feed on adult beetles, aphids, caterpillars, and other soft-bodied insects.

Do Stink Bugs Have Larvae?

Stink bugs have no larvae since eggs hatch directly into nymphs. Unlike most insect species, stink bugs undergo incomplete metamorphosis, which means they have no larval and pupal stages.

Examples of these worm-like larvae are maggots and caterpillars. They become flies and butterflies, respectively.

What Do Stink Bugs Look Like Before They Hatch?

Before baby stink bugs hatch, they are eggs that look like tiny pistachio nuts. Stink bug eggs are usually barrel-shaped, and white to pale green, depending on the species.

Females lay eggs on the underside of the leaves of their host plant. These eggs are usually laid in clusters of between 20 and 30, but 28 is the average.

Do Stink Bugs Have Nests? How Do You Find them?

Stink bugs don’t build nests. Instead, they are solitary insects and don’t live in groups. However, stink bugs congregate in a single food source.

Outdoors, they can be found in vegetation and leaf litter or sneaking around the windows and eaves. As adults, they overwinter in garden debris, weeds, and under tree bark

Indoors, overwintering stink bugs usually hide in attics, under the beds and couches, or behind baseboards. Aside from not being able to reproduce, they also seldom eat at this time.

Nevertheless, most adult stink bugs create buzzing sounds while they are flying. A lot of them can cause very annoying noises.

Why Do I Keep Finding Stink Bugs?

You keep on finding stink bugs because the weather is turning cold. Although these pests are mostly outdoors, they will try to enter inside a house once the fall season starts.

This is the time when they search for a warm place to spend winter. They will leave in the spring, and you will find them in plants and trees.

What Bugs Are Mistaken for Stink Bugs?

Stink bugs are commonly mistaken for other bugs, which include the western conifer seed bug, the boxelder bug, and the kissing bug. Aside from being look-alikes, these bugs also don’t bite or sting.

They also don’t cause damage to homes. Nevertheless, here are some of their similarities and differences:

Like stink bugs, western conifer seed bugs are orange when nymphs but will turn brown once they become adults. Interestingly, they also produce a foul smell when handled or crushed.

However, western conifer seed bugs have narrower and longer bodies. Their hind legs are widened, while stink bugs have straight legs.

As the name implies, they are most commonly found in boxelder trees, feeding on seeds. However, crushing them also causes them to release an unpleasant odor.

Unlike stink bugs, kissing bugs bite and suck blood from humans and animals such as bats, rodents, and pets.

How Do You Get Rid of Nymph Stink Bugs?

Since nymphs of stink bugs are smaller than their adults, they are more difficult to deal with. Another challenge is that they emit a pungent odor once you disturb them.

Most stink bug species are garden pests and can be nuisances inside your house. So, if you want to get rid of nymph stink bugs, here are some useful tips:

If there are only a few baby stink bugs, you can pick them up one by one. But instead of using your hands or touching them directly, grab them with a plastic bag.

Then, place them in a bowl or jar with soap and water to drown them instantly. Don’t throw live stink bugs in your garbage or flush them in your toilet.

2. Use a Vacuum Cleaner

Most stink bug nymphs don’t have fully developed wings yet, which means they cannot fly. Once indoors, you can use a dedicated vacuum cleaner to catch them. 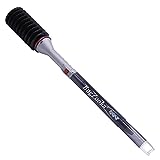 Stink bugs are attracted to lights, so light traps work effectively against them. To create one, simply half-fill a large pan with soapy water and shine it with a desk lamp or any kind of light fixture. Place it near the area where you find stick bugs. For wider coverage, use DynaTrap Large Mosquito & Flying Insect Trap .

However, essential oil sprays volatilize quickly, which means you may have to spray repeatedly before they work very effectively.

Related: How to Get Rid of Stink Bugs? | Identification and Control Guide

Pheromone traps are effective against stink bugs, but depending on the situation. According to a study, brown marmorated stink bugs are not attracted to aggregation pheromones during winter.

This is when these bugs are inside a house. These traps were also found ineffective in monitoring stink bugs.

Meanwhile, pheromone traps are also effective in getting rid of stink bugs in gardens. But if the infestation is severe, there may be some spillovers that can damage the plants.

Therefore, you should not place these traps near each other. You should also kill those spillovers or vacuum them as soon as possible.

What Are the Other Tiny Brown Bugs in My House?

Unfortunately, stink bugs are not the only brown bugs that can invade your house. These bugs or beetles may have different feeding behaviors than stink bugs and can also be nuisance household pests.

In fact, a lot of them are pantry pests and feed on stored food products. Here are some of them:

Depending on the species, stink bugs can either be pests or beneficial insects. This is why you should know how to identify them correctly. Their nymphs may not be as invasive as adults, but it does not mean that you should ignore them. Sealing all tiny holes around your house is an effective preventive measure.

Lowenstein, D., Walton, N. (2019). Why are all these bugs appearing on the side or inside of my home? Michigan State University Extension.