It’s a common misconception that every bug can be killed with the same chemicals. Sure, some chemicals work better than others but pests have adapted to some products over time, which is why not every chemical can kill every insect.

Most noticeable adaption is with bed bugs, chemicals that are used today to fight them are different than the ones in the past.

What chemicals do exterminators use for ants? According to the Journal of Exposure Science and Environmental Epidemiology, the most used chemicals for ants are pyrethroids and pyrethrin. Other commonly used chemicals are:

Beware that every exterminator has a different mixture (formula) and ratio, which is more or less the same in terms of ingredients. One exterminator might add 50% of “X” and 50% of water or something else, while the other one can have a different ratio.

In this article, we’re going to talk about different chemicals the exterminators use for killing ants. Grab your cup of coffee and stay with us. Let’s begin!

Before paying for an exterminator, be sure it’s the respectable one. The reason being is because he will always tell you what chemicals he is using, as well as potential health risks that they carry.

For example, chemicals like chlorpyrifos, diazinon, and organophosphates, in general, are forbidden by the Environmental Protection Agency since 2001.

So, if your exterminator tells you he’s using one of these, you should think about hiring him. Here are the typical chemicals that exterminators usually use for ants:

When talking about the most common ingredients in insecticides, permethrin is in the first place. Of course, only the licensed exterminators are allowed to use this chemical.

This chemical is just one part of a huge class of insecticides better known as pyrethroids. Pyrethroids and pyrethrins work in a very similar manner – they paralyze the ants, which eventually kills them.

Why are they so widely used? Well, because they’re very safe for both humans and animals, as they don’t trigger any allergic reactions or asthma. The downside is that they’re toxic for fishes and other aquatic organisms, so you should never throw them in the river.

Piperonyl butoxide often works in conjunction with MGK-264 substance. These substances aren’t pesticides and because of that, they can’t kill ants alone. When added to pyrethrins and other substances, though, they act as an enhancer, so they make the insecticide’s effect stronger.

Although EPA classified piperonyl butoxide as a carcinogen, it also says that the chemical isn’t toxic to humans. On the other side, allergic reactions like diarrhea and vomiting can be caused.

Hydramethylnon doesn’t seem very effective at first. This is because it slowly kills the insects like cockroaches, termites, and of course, ants. This is among the most popular insecticides for ants and we know that many exterminators use it.

When you apply the chemical, the ants that come in contact will become lethargic. They will start to grow weaker and will be dead in three or four days. Although it’s not going to mutilate all of the ants immediately, it’s a great long-term solution.

If some insects are alive, for example, they’ll gather again and will try to take retake their position. But, with hydramethylnon in place, they will not be able to do that. What about its health risks, though? EPA also classed this one as a potential carcinogen.

On the flip side, it isn’t that much toxic to humans, with possible respiratory tract and eye irritation if not used carefully.

These two substances fall under the insect growth regulators. As their names imply, they work by slowing down or inhibiting the insect’s development from the initial stage to the adult stage. Although they work on every type of ant, the exterminators mostly use it to eliminate fire ants.

In terms of toxicity to humans, methoprene and pyriproxyfen aren’t toxic to humans. But, similarly to pyrethrins and pyrethroids, they’re very toxic to aquatic animals. It’s always recommended that your exterminator disposes of them properly e.g. don’t throw it in water.

Neonicotinoids probably sound familiar to you. If you’re growing some plants in your yard, you’ve probably used them to repel bees or other insects that might do some damage. The interesting thing is that these are relatively new chemicals, first introduced in 1994 in the USA.

This group of chemicals is found in pollen and nectar of some plants and is very toxic to bees. Chemicals like clothianidin, imidacloprid, thiamethoxam, and acetamiprid are typical representatives of this group. They’re vastly used for indoor ant control in a form of either liquid or gel.

If your exterminator uses it, chances are that you have carpenter ants, fire ants or Argentine ants, as neonicotinoids work flawlessly against those insects. But, neonicotinoids, despite posing a moderate threat to human health, should still be used carefully.

Since they get into your body via the skin, you should never touch the treated place. Furthermore, neonicotinoids can negatively affect your nervous system. For example, imidacloprid is known for reducing sperm counts in some animals during long-term exposure.

Avermectin is a very effective insecticide against Argentine ants, fire ants, and carpenter ants. Since these 3 are the most common culprits, this chemical has become very popular among the exterminators in the USA. Baits that contain avermectin are often found in granules, and not liquids or sprays.

In its pure form, abamectin or Avermectin has very high toxicity. But, for killing ants, only a small concentration of this chemical is used, which in this case, isn’t as toxic. If you get exposed to Avermectin, know that it’s toxic to your nervous system.  And if you’re a woman, it can tamper with the fetus’s development in the early stages of pregnancy.

Thankfully, you can’t absorb higher amounts of this chemical through your skin.

Fipronil is yet another possible carcinogen, as claimed by EPA. Yet, it’s effective at killing all types of ants, including Argentine ants, carpenter ants, and fire ants. It comes in multiple forms, ranging from granules, gels, liquids, and even impregnated materials.

The chemical has a very strong effect on ants but unfortunately, it’s also very toxic to humans when ingested. It can be absorbed through the skin but not entirely. The effect is concentrated on the nervous system, in both ants and humans.

Fenoxycarbs are used specifically for fire ants and rarely for other types of ants. These granules have low toxicity and aren’t absorbed well through the skin. But, if you’re exposed to them in the long run, they can be toxic to your liver and represent a possible carcinogen, as implied by EPA.

Indoxacarbs are very similar, as they’re used for fire ants, and also come in granules. The toxicity is also low and side effects are the same, with the difference being that indoxacarbs are slightly less toxic.

Once again, a chemical for killing fire ants – metaflumizone. Metaflumizone comes in two shapes, either pelleted or granular. With low acute toxicity to humans, it’s relatively safe to use in the households’ exterminations.

Carbamates are often used as herbicides or insecticides with the ability to affect the nervous systems of humans and insects. They interfere with the transmission of nerve impulses through the inhibition of an enzyme called cholinesterase.

Organophosphates do the same as carbamates but different chemicals represent them. Some of them are diazinon, phosmet, malathion, chlorpyrifos, and azinphos-methyl. In the beginning, we said that these were forbidden but they were used before the 2000s.

The reason for their removal is that they’re hazardous to children. Furthermore, a couple of these chemicals are possible carcinogens and they’re neurotoxic at low doses.

Should You Use These Chemicals on Your Own?

Never! The chemicals we mentioned above can be pretty dangerous if used by someone who is not an exterminator. Chemicals like these are used only by the licensed exterminators who know how to handle them without posing a threat to the environment.

If you want to kill ants in your house without the help of an exterminator, we recommend using only the safe pesticides that you can buy on Amazon or any other reliable vendor. 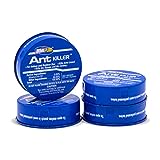 Now that you’re at the end of this article, we inform you that this was strictly informational. You should know what your exterminator is using for killing ants, and now that you know the most popular chemicals, you can ask him about some of them and choose the best option.

When killing ants or any type of pests, you should first worry about preserving your health. If your exterminator won’t tell you about the chemicals he’s using, we suggest avoiding him. Ants can be terrifying but with the right professionals, you can get rid of them quickly, without endangering your health. Best of luck!

Eco-toxicological effects of the avermectin family with a focus on abamectin and ivermectin, Bai S.H., Ogbourne S.