Unlike other bees that only sting once, the European hornet stings multiple times. What’s more bad about this is that it ejects a chemical scent called pheromone, which alerts other hornets to attack.

By reading this guide, you will know more about European hornets, including their characteristics, first-aid treatment, and ways to get rid of them. So, let’s get started!

What Are European Hornets?

European hornets are the largest social wasp, originally from Europe. They live in colonies containing 200 to 400 associates during their peak.

You can typically see them during late summer. Their eyes are profoundly indented, has a C-like shape with reddish-orange wings, and striped yellow and brown petiolate abdomen.

Furthermore, European hornets’ thorax and abdomen are hairy but not as hairy as most bees, like the honeybees. Females are generally larger than males, and only they have stingers.

That means that the male European hornets can’t sting. However, their antennae are longer than the females with at least one segment. The males have 13 segments while the females hold 12.

They prey on different large insects, such as:

Hornets are multicolored with yellow or white stripes that counter against their black and brownish-red bodies.

Additionally, their heads have a lighter color, and they have antennae, large dark eyes with six legs, and two wings. Their stinger is located at the end of their body, connecting to a gland containing the venom. Their size ranges from 3/4 of an inch to 1 ½ of an inch.

Are European Hornets Rare in the US?

The European hornets are becoming a more common sight in the U.S, particularly in Eastern North America. However, they are still considered an endangered species since their nests are often destroyed due to people’s fear of getting stung.

What Do European Wasps Eat?

What to Do if a Hornet Bites You?

This varies based on the stringency of the case. For mild cases, you can treat the sting by yourself, as follows:

Do Hornets Sting for No Reason?

Hornets don’t normally sting for no reason. The reason they string is that they are provoked or unintentionally bothered in their nest.

Just like most hornets, they will protect themselves by stinging if they feel threatened. If you end up troubling an entire nest and get stung several times, it’s best to seek instantaneous medical attention.

You’re likely to have a raised lump around the sting site and a minuscule white mark visible in the middle of the bump, where the hornet pierced your skin.

How Bad Is the Sting From a European Hornet?

Although the sting is quite painful, the European hornet stings rarely induce severe problems. However, their venom has toxins, causing allergic reactions in sting-sensitive people.

Roughly one in 10 people who are pricked two or more times are allergic—meaning they will experience severe responses to any succeeding stings.

How Do You Know If You Get Stung by a Hornet?

If you get stung by a hornet, you will feel almost instant pain at the sting site. It will be accompanied by a sharp, burning sensation that typically lasts only a few seconds.

However, the red-swollen welts can get worse within 48 hours right after the sting and can last for a week.

How Long Does a European Hornet Sting Last?

The severity of pain or the burning sensation at the stung site can last from 1 to 2 hours. Regular swelling from venom can rise for 48 hours after the sting.

The stung site’s redness can stay for 3 days, and the swelling can prevail for up to 7 days.

Are Hornet Stings Awful Than Wasps?

Though they both nest similarly, hornets are well-known to be lesser hostile than wasps when not provoked. In addition, their stings are much worse to experience than usual wasp stings due to the chemicals they hold.

Unlike other bees, which can only sting one time, hornets can also attack multiple times. This is because hornets have smooth stingers, while the other bees have a barbed stinger that can’t be pulled away without ripping out their abdominal tissues.

Can European Hornets Kill You?

Although European hornets’ sting is quite painful due to the venom they secrete and the multiple stings they can do, it’s not true that they can kill.

However, if you are allergic to bee stings, immediate treatment is required if pricked multiple times to avoid adverse effects.

How to Treat European Wasp Sting?

For less severe stings, you can treat the European wasp sting by:

What to Do if You Find a European Hornet?

If you find a European hornet nest on your property, it’s best to call a licensed pest control expert to handle the issue. Do-it-yourself removal of European hornets is not advised as it can get too dangerous.

It will need the right equipment and expertise to solve the problem thoroughly, so it’s always best to leave it in the hands of professionals.

How to Get Rid of European Hornets?

Noticing big-size worker European hornets buzzing around your property is a sign of infestation. Nests are commonly found in areas such as:

If you find their nest at these sites, this is an indication that European hornet removal is necessary.

Control their number by applying a pesticide directly into the nest at dusk. Use any Wasp & Hornet aerosol  type that propels insecticide up to 10 to 15 feet.

Know that this is best done by a licensed pest control expert. However, if you think you can handle this task, you can proceed at your own risk.

Make sure that you are wearing protective clothing, such as long pants, a long-sleeved shirt, etc. To apply, spray directly to the nest entrance for about 5 to 10 seconds. After that, move as fast as you can away from the area to avoid the hornets emerging from their disturbed nest.

You may need to do this again the following evening until these hornets decide to leave your property. Also, remember not to hold any lights to them as it will entice them to fly towards the light source.

Where Do European Hornets Nest?

Related: How To Get Rid of Hornets Nest? | A Complete Guide

How to Keep European Hornets Away?

Several methods can keep European hornets away from your property. This means maintaining fixtures and home structures, making a soapy water spray, and more!

To know about these practices and more, consider following the preventative measures given below to hornet-proof your house:

Food scraps and uncovered garbage cans can attract the attention of the hornets. So, it’s necessary to make sure that your surroundings are without food scraps, including your trash cans.

As much as possible, wrap your food waste tightly inside a trash bag. Ensure that it’s leak-free so that these invasive pests won’t get lured to your area.

Bird food and nectar can also entice hornets, so consider removing them as well.

You can either purchase a wasp trap  from a store or make one by yourself. Prepare the following materials if you opt for D-I-Y traps: 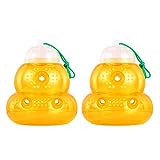 To make the hornet trap, consider doing the following actions:

One way to deter hornets from coming close to your house is to grow hornet-repellent plants. This includes:

Cultivate these plants near your residence, especially where you often see hornets flying around.

Make a Soap and Water Spray.

Another way to keep European hornets away is by mixing dishwashing soap and water. This is an effective wasp killer and an excellent defense against mud dauber and yellowjacket.

To make a spray:

Essential oils are excellent repellent to many insects. They have a strong scent disliked by most insects, especially the European hornet.

To make a spray:

How to Trap European Hornets?

To trap a European hornet trap, position a lighted bulb above a transparent bowl with soapy water. The hornets are drawn toward the light and often drop too low, drowning them in the process.

Managing European hornets begins with a nighttime inspection since they are more active during nighttime. It’s the best period to observe them learn the exact location of their nest.

Understand that hornet nests are usually hard to reach and treat. For safety reasons, it’s best to call a licensed pest control expert for help.

They have the right equipment, products, and expertise, which are required to control the hornets effectively. But, if you have experience doing such a task, you can proceed at your own risk. Just make sure to wear protective clothing and be cautious at all times.