Some vespid species are known as solitary. However, there are exemptions such as paper wasps and bald-faced hornets. They are social and inclined in building large colonies.

The workers in a wasp colony in areas located in the northern latitude die because of cold weather and starvation.

Not everyone is gone as the queen survives. After mating, she finds a safe place to spend the winter and re-establish a colony. Beware, as it can get into your house for shelter.

How to get rid of wasps in your house? You can choose from several sprays that are formulated to kill wasps in the market. A mixture of soap and water can replace the ready-to-use spray.

This article will provide sufficient information to evaluate if you can do it yourself or let the professional take care of your wasp problem at home.

Why Do Wasps Try to Get in the House?

The queen wasp mate around fall, and as the temperature drops, it seeks a secure place to start a colony. She prefers a refuge which can be your house. The ideal places are the attic, wall voids, and similar areas.

How Do Wasps Get in the House?

Wasps are active in late winter and early spring when the temperature gets a bit warmer, around 70 degrees Fahrenheit. When situated in a wall void, vent, or chimney, they search for light. Instead of going outdoors, they tend to move inside the house.

Slow-moving wasps usually crawl on the window area and floor of a house. When these insects successfully get inside, they are usually left unnoticed. You may even step on it, or the wasp got caught up in clothes.

It seems that this is a harmless situation. On the contrary, it’s a disadvantage as you may get stung without any warning.

However, the wasps that are active during the warm days of winter and early spring are not aggressive. Hence, there’s a low chance of attack. They usually fly around during the day and settle down at the end of the day when the surrounding becomes cool.

Why Do I Keep Finding Wasps in My House?

You will likely face this problem in late summer and early fall. The wasp colonies are getting into their maturity stage. Thus, numerous workers forage or search for food that is delivered to the queen.

When the number of insects that they prey on dwindles, they will seek other nutrition sources.

Wasps are into sweets like ice cream, soda, fruits, and more. They will also feast on fish, meat, and similar types of food. To counter their foraging habits, you have to always close your garbage bins placed inside your house.

It’s best to cover your food after meals. Wasps won’t keep on visiting your house when they can find nothing.

How Long Can a Wasp Live Inside Your House?

A wasp can live up to 3 or 4 days inside your house when it can’t have access to food. However, it can survive indoors for 3 months if it has food and water.

How to Keep Wasps Away From Your House?

You can start working outside your house to keep the wasps away. Make sure that the trash bins are covered with tight-fitting lids. In warm months, empty and wash them frequently.

If you can, limit eating outside your house. When you have a party in your yard, clean up and dispose of the trash right after the occasion.

Wasps can build their nests in PVC pipes, meter boxes, wall voids, hollow fence posts, and other inside cavities. For prevention, seal the opening to these areas. However, it’s not advisable if there’s an active nest inside your house.

Inspect the windows if there are any holes. To keep wasps away from your house, putting a screen as a shield on your window is helpful. It’s best to keep food after meals.

Since wasps love sweet food, clean up the spill of syrupy beverages. Refrain from using strongly scented body spray as they can think of it as nectar.

How to Catch a Wasp in the House?

Appropriate Clothing for Your Safety

The sting from the wasps causes all the fear to get near it. You can protect yourself by wearing a top with long sleeves, pants, gloves, shoes, goggles, or glasses.

You can’t just start to look around for the wasp inside your house. It’s easy to just vacuum on areas with cracks and tight spaces. Also, it can get rid of the food crumbs that can attract wasps. You have to add disposable bags to the vacuum so you can easily discard the wasp and dirt.

You can make a DIY trap to catch a wasp through a two-liter plastic bottle. Cut the whole neck of the bottle and half of the bottle’s body.

Remove the bottle cap and attach the neck to the bottle’s bottom part that you have cut.

You need to put the bait at the bottom of the bottle. Jam or something sweet and even meat can attract wasps. Add a little vinegar on the neck so the wasp can’t escape the trap.

Another way to catch a wasp is by using pest strips like Hot Shot No-Pest Strip 2 . But this item is recommended to use in areas where people don’t usually hang out. 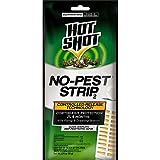 Therefore, it’s suitable for attics and storage rooms where there’s little air movement. The pest strip has chemicals that are not good for humans. When there’s a wasp trapped on it, vacuum and throw it.

How to Get a Wasp Out of Your House?

You can spray insecticide or apply insecticide dust near the nest to get the wasp out of your house. The DIY solution can also be used as it can trigger the olfactory nerves of the wasp so it can voluntarily leave your house.

What Smell Do Wasps Hate?

There’s an interesting study about insects that have colonies like wasps. It came up with a result that a strong odor is not the only thing that can suffocate them. CO2 can also do the same thing as the concentration of this element is so high in colonies.

How Does Vinegar Get Rid of Wasp?

Since wasps don’t like the smell of vinegar, you can mix it with water and sugar or mint and witch hazel. After mixing, you can spray it directly on the wasp.

How to Kill a Wasp in Your Home? 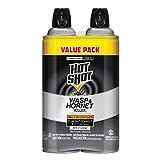 You can have the handheld spray if the wasp nest can be easily accessed. When necessity asks for it, you have to select the one with a long nozzle.

Be attentive to spray each wasp as they get out of the nest. It’s to ensure that you kill the entire colony before you can destroy the nest.

Another option is insecticide dust, but you must have a bulb or bellow duster. The best options in the market are Control Solution D-fense Dust , Delta Dust Multi Use Pest Control , and Rockwell Lab Dust Insecticide .

When professionals use the dust, they hold on to dusters with a long pole. So, they can reach the nest even if it’s in a constricted area. If you do it, be careful not to tear the paper envelope of the nest as it will make the wasps scatter.

Wait for 3 to 4 days to confirm whether all the wasps die or not after covering the nest with insecticide dust.

If you don’t want either of the first two options, you can make a water and soap mixture. But this is relevant if you only have a few wasps in your house.

After you make the mixture, you can spray it on the wasp. It will die since the soap blocks its breathing pores.

Does Killing a Wasp Attract More?

The wasp is one of the insects that release a pheromone, a chemical that is utilized when mating, finding food or taking advantage of food sources, and escaping predators. It can be air-borne, and it travels slowly but doesn’t fade away.

But pheromones are conveyed in different signals as concentrations or combinations differ. Still, a dying wasp can send it to others. As long as you are fully covered with the right items to kill them, you’re good.

If the number is too high for you to handle, it’s best to leave it to professionals.

How to Remove a Wasp Nest From House?

You can remove a wasp nest from the house by covering the nest with a large plastic bag. Close the bag around it then cut the limb.

Will Wasps Come Back if You Destroy Their Nest?

Wasps don’t come back as they usually die in fall or late October due to the freezing temperature. The sole survivor is the queen, and she will build another nest.

Getting rid of wasps in your house is not too difficult if you know the right procedure and appropriate things to use. You can let go of your fear of getting stung as you can wear additional clothing.

Besides keeping them away from your house, you should prevent them from entering your house by closing openings and proper garbage disposal. If it’s out of your hands, better hire a pest control service.