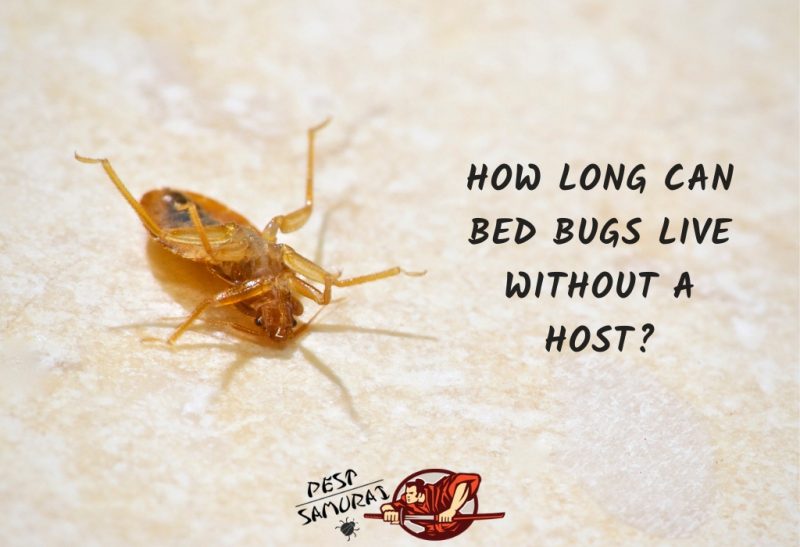 Discovering that you have bed bugs in your home immediately ruins one’s day, especially if you have an idea of how hectic these pests can be. However, if you have never come across these little bloodsuckers, you will be overwhelmed at the number of facts you are about to discover.

These facts include bed bug’s impressive ability to live pretty long without a meal. This length of time is impressive to many but it very frustrating to anyone who wanted to fight bed bugs by letting them expire on their own. Before this post even continues further, the idea of trying to eliminate bed bugs from your home through their starvation is a bad idea because bed bugs will move from place to place in an attempt to feed. This will in effect cause the bed bugs to spread out and make them even harder to eliminate.

So, how long can bed bugs live without a host? There are many studies on the survivability of bed bugs, and the only thing the researchers seemed to agree on was that bed bugs can hibernate. The length of that hibernation, however, is still debatable. So the most conclusive answer that we can give is that bed bugs can go without feeding (depending on multiple factors) for an average of two or six months to a year.

See, not very conclusive right? Worry not because there are reasons for these discrepancies. The reason for the varying conclusions about bed bugs’ survivability is the fact that there are several conditions that affect their survival. This article gives an in-depth look at these factors that affect a bed bug’s life span.

Read on in order to understand more about these factors and bed bug’s feeding habits, growth span and their weaknesses.

What is Bed Bug Hibernation?

When bed bugs hibernate, they enter a state called diapause. Bed bugs do not have a specific time when they hibernate. They do not wait for winter like bears and go into an undisturbed sleep, no, their hibernation is circumstantial. It is caused by climate change. The change in temperatures causes these bugs to go into a dormant state that preserves energy which in effect causes them to live longer without a meal.

The Conditions That Affect the Survivability of Bed Bugs

As noted above, there have been numerous studies that have been conducted to determine exactly how long bed bugs can survive without feeding. These tests were carried out in labs that technically dictate very controlled environments. It should be noted that these extreme environments might not be exact in the real world because bed bugs do migrate in search of food.

A starving bed bug in the real world conditions would have to be located in extreme circumstances; e.g. an abandoned home which also happens to be located in an isolated location where there are no other homes.

The lab results carried out have reported that bed bugs can go without a meal for incomprehensible lengthy periods of time with the longest being 18 months recorded in the year 1914. Other recent studies have recorded that their starvation tests saw the bed bugs expiring after only two months. These tests incorporated the following conditions in their research.

One of the factors that severely affect bed bug’s reproduction, feeding habits down to their lifespan is the changes in climate. First, it should be noted that one of the surest ways to eliminate bed bugs is by severely influencing the temperatures in a room. Bed bugs cannot survive in temperatures that are below 0 degrees Fahrenheit and neither can they survive in conditions above 118 °F. This is why some exterminators choose to use heat as their go-to method of eliminating bed bugs.

A bed bug goes through several instar stages before fully becoming an adult.  These stages are five in total all of which require a feeding and skin shedding before moving on to the next stage. As the bed bug advances from stage to stage, its resilience increases and thus it can live longer without a meal.

Studies have shown that these stages are also affected by temperature. The younger the bed bug is, the less likely is it to survive the harsh conditions sent its way. For a nymph to transform to the next stage, it must feed. If it doesn’t, then the next stage is prolonged or hindered permanently.

• The Strain of the Bed Bug

There are different kinds of bed bugs out in the world, over ninety species to be exact. However, only three are interested in human blood. In light of this, it has been discovered that some strains of bed bugs are more resilient than others. This is one of the reasons why bed bug elimination has been so challenging.

The difference in the strain of bed bugs has also been a factor as to why all those starvation studies have given different conclusions about the length of time a bed bug can survive without a meal.

• The Amount of Blood

The feeding time of bed bugs is influenced by the size of the bug and the amount of blood it fed previously. This also affects its desire to feed again. If its last meal was a hearty one, then the bug has something to live on longer before starvation sets in.

Bed bugs can ideally live for a while without feeding. This information may not actually help you in the fight against bed bugs because it would require a lot of time and tactic in order to use starvation against these bloodsuckers. To actually succeed in using starvation as a tool to eliminate bed bugs in your home, you would need to completely isolate the bed bugs from the food chain.

Another characteristic that challenges the idea of using starvation as a tool against bed bugs is the fact that they would eventually spread out in search of a meal, hence causing the spread of the problem.

As stated in the points above, there are various strains of bed bugs and it would be really challenging to figure out the type of bed bug you have in your home. You might have the strain that is resistant to most challenges, this would in effect lead to frustration because they would overcome the same challenges meant to eliminate them.

All in all, bed bugs do have some survival tricks up their sleeves and the best chance you have of eliminating them from your home is calling an exterminator. If you have a smaller infestation you can use our methods to eliminate them. If the infestation is pretty large, your exterminator will inspect your home and identify the type of bed bug residing in your home.

They will then come up with a plan to eliminate the bed bugs which may include a series of repeat treatments because as we have seen above, bed bugs can live for quite a while without a meal.

When you treat your home for bed bugs, some usually hide away until the coast is clear and the chemicals are no longer as strong. Once they determine that the environment is safe once more, they come out and continue to feed hence the need for a repeat treatment. In their hiding state, they may go into diapause until the conditions are favorable once more.