If some insects are buzzing around your house and garden but are not bees, they could be mud daubers. But don’t panic; these garden insects are beneficial and are rarely considered pests. Therefore, you may think that it’s fine that they are around. However, some people say they are dangerous because they sting.

But, how dangerous are mud daubers? Mud daubers are generally harmless and don’t attack humans. But sometimes, their sting can be painful and may cause skin swelling. Fortunately, they don’t carry diseases, and they are unlikely to sting unless provoked. Mud daubers are very docile and not that dangerous.

Mud daubers are known to be calm insects and don’t bother people unless they are mishandled and feel threatened. They are also beneficial to the ecosystem. However, their nests can be a nuisance and should be removed. But before taking any actions, you should know their appearance, eating habits, and habitats. Continue reading to learn more about them.

What Are Mud Daubers?

As their name implies, mud daubers build their nests out of mud, except for blue mud wasp. This species is a bit lazy because they don’t create nests. Instead, they use nests that were previously used by black and yellow mud dauber. They are also very creative because they remodel nests using water instead of mud.

Mud daubers are in the order of insects called Hymenoptera, and they belong to the two families of wasps – Sphecidae and Crabronidae. But unlike social wasps such as paper wasps and yellow jackets, they are not usually aggressive, and they don’t defend their nests. Mud daubers are solitary, and they have no colony.

In general, mud daubers are about ¾ to 1 inch (19 to 25.4 mm.) long. They have two pairs of dark, powerful wings, and three pairs of yellow (sometimes yellow and black) thin legs. Their waist, which is called the petiole, is more slender and narrower as compared to wasps. Their body color depends on their species.

What Do Mud Daubers Eat?

Generally speaking, mud daubers eat spiders, and each species has its favorite type of spider. Black and yellow mud daubers and organ-pipe mud daubers prefer crab spiders, while blue mud daubers usually prey on black widow spiders. On the other hand, other species feed on small insects and cockroaches.

Female mud daubers are the ones hunting for food while males will guard their nests. They sting spiders to paralyze them permanently, and they bring them to their nest for their young. When a mud dauber egg hatches, the larva will eat the spider. Once the adult emerges, it will create a hole in the nest and will leave.

Nonetheless, mud daubers are omnivores. Aside from spiders and insects, most adult males drink the nectar of local flowers. Females also occasionally sip nectars, but they prefer spiders more so they can feed their babies. Amazingly, most of them can easily land on cobwebs and sting spiders without getting entangled.

How Do Mud Daubers Build Their Nest?

As mentioned earlier, mud daubers generally build their nests using mud. Only the females build nests where they lay one egg only for each cell. Interestingly, they carry tiny mud balls and “sing” (buzz) while bringing them to the nest site, which is usually near a spider web. It usually takes them an hour to build a nest.

The nests of black and yellow mud daubers are cylindrical cells that are as big as a fist. Females patiently form them into a smooth mud nest. On the other hand, organ-pipe mud daubers build cylindrical tubes that look like pipe organs, hence their name. And again, blue mud daubers only modify the nests of other species.

Each nest is divided into 15-20 cells, and each cell can accommodate about 20-30 paralyzed spiders. By doing simple math, a single nest can have between 300 and 600 spiders! No wonder a mud dauber’s nest looks messy. Nevertheless, this is the main reason why these wasps are very useful in our ecosystem.

Where Do Mud Daubers Live?

In nature, mud daubers construct their nests under rock overhangs, cave entrances, etc. In human environments, you may spot these nests in eaves of buildings or houses, garages, wall faces, roof overhangs, barns, bridges, and other flat surfaces. However, they rarely build nests inside occupied homes.

Mud daubers prefer living in dry, warm, and quiet places. They can live and search for food alone, although females may build nests near each other. Organ-pipe mud daubers hibernate in the winter and come out to mate in the spring. This is why you may find their nest inside your house during cold months.

Mud daubers are not considered dangerous. They don’t carry bacteria and don’t transmit diseases to humans. Unlike social wasps, their venom lacks antigenic properties and is significantly smaller in amount. Because they are solitary, you are unlikely to encounter lots of them in one place.

Mud daubers sting. However, they rarely sting humans and reserve their venom for spiders, which are their main source of food. A mud dauber sting is not considered painful. In fact, it is rated 1 on the sting pain scale with a range of 1 to 4, with 1 being the least painful. It is also very rare to cause swelling of the skin.

What Can Attract Mud Daubers?

Mud daubers are attracted to places where they can build nests near spiders or cobwebs. They are also fascinated with the sweet fragrance of some flowers and sweet-smelling fruits such as honeydew melon. Some people claim that they are also attracted to orange and yellow colors, although there’s no study to prove it.

How Do Mud Daubers Get In the House?

Mud daubers rarely enter houses and prefer building their nests on the eaves of a house and outside walls. But once they do, they pass through small openings such as broken windows, damaged window screens, and slightly open doors. They can also enter your house by flying to your attic, chimney, and roof vents.

Mud daubers have lots of natural enemies that eat them. This includes flies, wasps, and even spiders that they hunt. These predators usually attack their nests and eat all their eggs and larvae. Male mud daubers are being left behind in nests to watch over their young, but they are mostly sipping the nectar of flowers.

How to Get Rid of Mud Daubers Naturally?

As mentioned above, mud daubers rarely sting humans, and they don’t transmit diseases. They also don’t bother people and can only be annoying if they are buzzing aloud while building their nests. But if there are valid reasons to get rid of them, avoid using chemicals. Instead, here are some ways on how you can do it.

Spiders are the favorite diet of mud daubers. So, if you get rid of spiders and their house, these buzzing wasps are likely to move to another location. Most spiders are harmless, but some species like the black spider are poisonous.

Mud daubers are very docile and will not attack you even if you disturb their nest. In that case, you can carefully move their nest away from your home without getting stung. To remove it, simply scrape it off slowly with a paint scraper.

If you spot a mud dauber’s nest with some holes, chances are the larvae have already turned into adults and left. They will build a new nest somewhere else and will never return. Destroy or wet the nest so blue mud daubers cannot use it.

Most mud daubers hate the smell of some essential oils. Therefore, you can use these scents to repel them. Simply spray essential oil solutions around their nest so that larvae will slowly move away. Here are some of them that you can try.

Note: Mud daubers are likely to return once the scent of these essential oils is gone. Therefore, you may need to spray several times.

How to Trap Mud Daubers?

Mud daubers are not pests, and they help us a lot in reducing the population of poisonous black widow spiders. They only become a nuisance when they build nests inside or around homes. You should only trap them if you cannot get rid of them naturally. Here are some ideas on how to trap mud daubers:

Put some honeydew melon or any sweet fruit inside a plastic container. Leave the container open and hang it near a mud dauber’s nest. Once the mud daubers enter the container, bring it far from your house and throw away the fruit. The more traps you make, the better. Wear gloves just in case they will sting you.

Products such as the RESCUE! Wasp TrapStik  is very effective in attracting wasps, carpenter bees, and mud daubers. Instead of using strong scents that can harm small children and pets, this sticky trap is visually attractive to bees and wasps. So once they landed in it, they can no longer escape, and they will die. 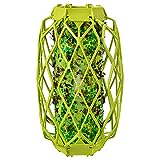 How to Prevent Mud Daubers From Entering Your Home?

Mud daubers are not usually tempted to enter houses, but it does mean that they will not. If they find your home as a suitable place to build their nests, they will persistently enter without your knowledge. Remember, they love warm and dry places. Here are some ways to prevent them from entering your house:

How to Prevent Mud Daubers From Building Nests?

Unfortunately, there is no proven method that can stop mud daubers from building nests again. Once you remove their nest, they will come back next year to build a new one. All you can do is remove their nest once you see them. And since they are not dangerous pests, killing them should only be the last option.

It is not illegal to kill mud daubers, but you should avoid it. Instead, prepare for their peak season and drive them away patiently. After all, these special wasps are not dangerous unless you provoke them. This is why you should know how to differentiate them from social wasps, which are opposite in terms of behavior.

Long, R. F. (2018). Why mud daubers are on spider patrol. University of California – Division of Agriculture and Natural Resources.