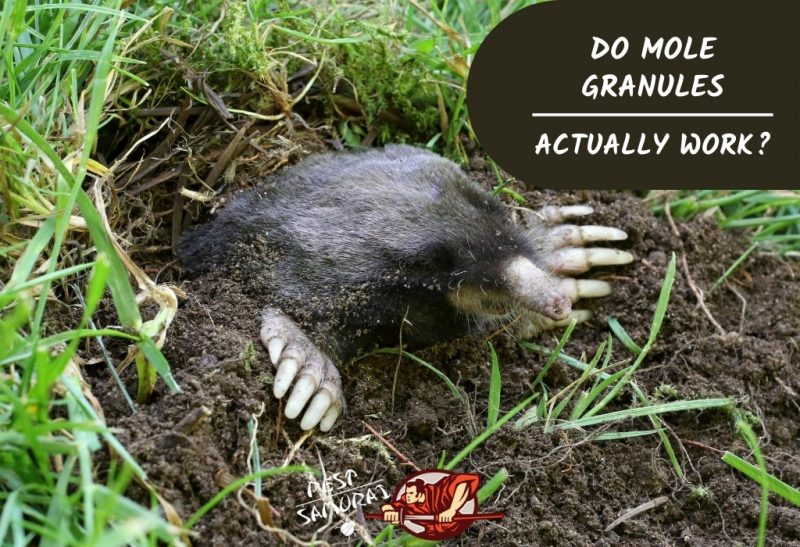 Despite their importance in aerating the soil, moles can do a lot of harm to your yard. If given a chance, these burrowing mammals will wreak havoc to your garden, destroying bulbs, grass, and plant roots. For getting rid of moles a lot of people use mole granules but are they really effective?

Do mole granules actually work? Mole granules work well in deterring moles, gophers, armadillos, and most burrowing critters from gardens. The main ingredient in most granular repellents is usually castor oil, which irritates moles due to its scent and taste. However, you’ll need a combination of more methods to properly get rid of them.

Getting rid of a mole or any burrowing animal is not an easy task. In this article, we will examine the effectiveness of mole granules and other techniques you can use to eliminate moles. Let’s begin!

How Do Mole Repellents Work?

Granular mole repellents function by emitting unpleasant smells that force moles to relocate to different areas. The best types of granules such as the ones from Repellex use castor oil as the primary ingredient.

These castor oil based granules will penetrate into their tunnels and create unpleasant living conditions for the moles. After moles sense these granules they will move away from your garden in search of more favorable living conditions.

Poke Holes Into the Tunnels and Insert the Granules

You’ll want to ensure that the granules are well inserted in the soil. Once you’ve dropped the granules, you’ll need to pour some water to allow the castor oil to penetrate the ground.

The castor oil taste and scent will be enough to do the magic and discourage moles from returning to your garden.

While you might be tempted to place the granules during the rainy weather, that is certainly not a good idea. The rain will rid the granules of the castor scent and taste as the raindrops continue to hit and penetrate the ground surface. Apply the granules several times if you want to see good results.

Distribute the Granules Evenly on the Garden

Since moles have a superior sense of smell, they’ll probably detect an area with no granules. As a result, it is advisable to spread out the granules evenly to prevent the mole from switching to a different area within your garden.

Use the Mole Repellent Granules Frequently

While most manufacturers will insist that their products last for 3-4 months and this is true in some cases but applying the granules after 1.5 months is more advisable, especially if it rains often in your area.

Remember, if it rains heavily, you might need to reapply the granules very often to keep the castor oil granules effective.

Besides granules, you can also use the following techniques to scare away and eliminate moles in your yard or garden. Let’s begin!

Due to their poor eyesight, moles are highly sensitive when it comes to foreign sounds or smells. These pests will run for safety when they smell or detect a potential threat beneath the soil.

Vibrating stakes scare away moles and make their burrowing uncomfortable, forcing these tunneling pests to relocate to different areas.

These handy devices function by releasing ultrasonic waves, transmitting them as vibrations beneath the surface, which helps to repel moles, voles, and other rodents. Point to note, you’ll need several vibrating stakes to deter moles from a bigger garden.

How to Use Vibrating Stakes for Mole Control: Instructions

The first step is to determine the number of vibrating devices you’ll need based on the size of your garden. It is advisable to purchase high quality vibrating stakes like the VANZO Mole Repellent, which are solar-powered and durable. 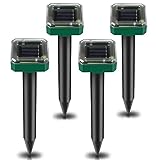 When installing the vibrating device, remember to set it as deep in the ground as possible. Use a trowel to dig deep holes where you’ll insert the devices. Once done, pack the soil carefully such that the hole is well and firmly filled.

While you can use battery-powered vibrators, it is advisable to go for solar-powered stakes as they tend to last indefinitely. Even more important, be sure to buy water-resistant vibrators that can withstand heavy rainfall. Either way, you’ll need to check on these vibrators regularly to ensure that they function as intended.

If you spot mole activity within a week of installing the vibrating stakes, consider changing their location, for example, move the devices closer to molehills.

Home remedies, stakes, and granules only help to scare away moles, while on the other hand using traps will permanently eliminate the presence of moles in your gardens.

Some mole traps such as the Tomcat Mole Trap are even reusable, allowing you to carefully plan and treat your garden. These mole traps are placed inside their tunnels and work really well. 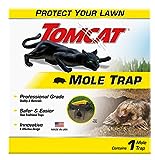 You can also use several home remedies to scare away moles and prevent them from messing up your garden. Some of the methods include:

Crushed glass can come in handy in keeping moles from wreaking havoc to your garden. You’ll need to dig up and place the glass into the tunnels to make burrowing uncomfortable for these pests.

Using thorny branches will also help to make their tunnels unusable. While not guaranteed to work since moles can dig up tunnels in different locations, it can help discourage the pest for at least a week or two.

Consider planting castor beans, marigolds, fritillaries, and alliums in your garden to deter moles. On top of beautifying your garden, these plants produce scents that moles find to be repulsive, meaning they’ll stay away from your property.

To overcome your mole problem, you’ll need to understand their adaptive features. Below are some important facts about moles that will help you improve the efficiency of our pest control methods.

• Moles Have a Superior Sense of Smell

As Kenneth Catania (a highly respected biologist) asserted in his study, moles rely heavily on their sense of smell to detect predators and, most importantly, find their food.

Despite having poor eyesight, moles have compact and strategically positioned nostrils that allow them to smell in stereo. Smelling in stereo means that moles can determine the direction of the smell and consequently know the best direction to burrow either in search of food or escaping predators.

Therefore, failing to distribute mole granules properly on the surface of your garden might not deter moles. Instead, it might force moles to burrow in a different direction of your garden.

While most people perceive (incorrectly) that moles burrow in pursuit of plant roots, these tiny underground mammals destroy roots as a result of their hunt for earthworms. Did you know that the amount of worms moles can eat per day is almost proportional to their body weight?

These burrowing critters also consume insect larvae, which helps to protect your garden from other pest infestations. But either way, understanding that moles feed very often will help you better strategize your plan of attack.

The odds of spotting a mole running around your garden are incredibly slim. The telltale signs of a mole attack are usually furrows and molehills.

Since moles aren’t social animals, getting rid of one mole doesn’t mean you’ve eliminated your entire mole problem. These critters rarely communicate with each other, meaning you must always have your guard up to deter moles from visiting your garden and ruining your crops.

Eliminating moles is no easy task but with the right strategies, you can overcome the mole threat and protect your garden. When using granules, it is advisable to distribute them evenly across the garden to ensure that every part is covered. And since moles loathe the taste and scent of castor oil (the main ingredient in granules), they’ll move away from your yard and search for better living conditions.

To increase the chances of success, you might want to combine granules with other humane mole-deterring strategies such as vibrating stakes. But if you want to kill these pests and leave your yard completely mole-free, using reusable traps will also get the job done.

Moles and Their Control, University of Nebraska